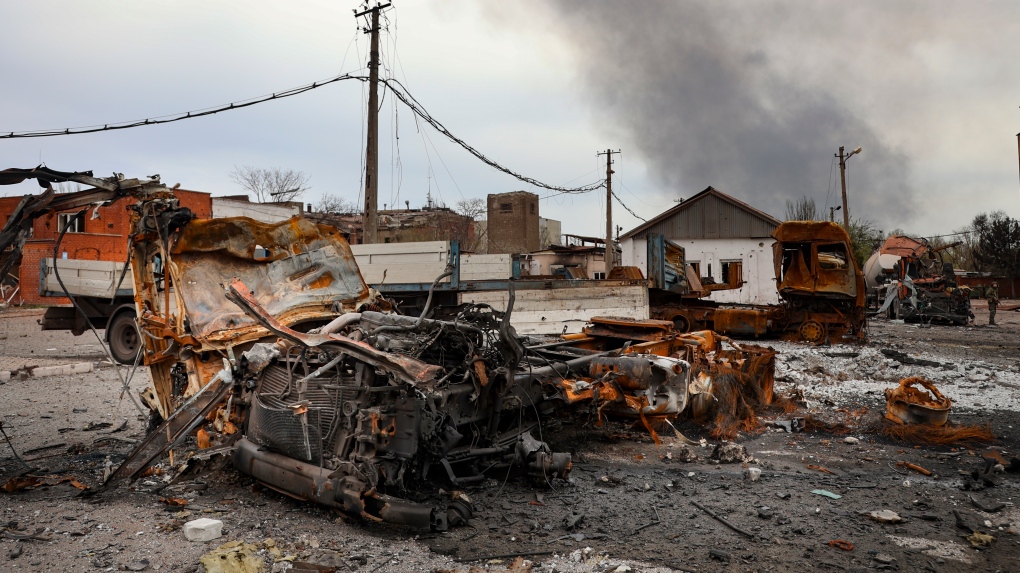 
What is happening in Ukraine today and how are the countries of the world reacting? Read live updates on Vladimir Putin and Russia’s invasion of Ukraine.


KYIV, Ukraine — Video released by the Ukrainian National Guard’s Azov Regiment, part of a group currently locked up in the Azovstal Steelworks in Mariupol, shows women and children taking shelter underground. Some of them hid in the factory tunnels for nearly two months.


“We want to see peaceful skies, we want to breathe fresh air,” one woman said in the video released on Saturday. “You just have no idea what it means to us to just eat, drink sweet tea. For us, that’s already happiness.


Another young girl in the video says she and her relatives left home on February 27. Since then, they have seen “neither the sky nor the sun”. “We really want to get out of here safely, so that no one gets hurt,” pleads the young girl.


Azov deputy commander Sviatoslav Palamar told the AP the video was shot on Thursday. The content of the video could not be independently verified.


According to Ukrainian officials, some 1,000 civilians, including women and children, remain trapped in Azovstal with Ukrainian troops dug in there.


Synehubov said on the Telegram messaging app on Saturday that over the past day Russian forces have fired 56 times at civilian infrastructure in the region.


Kharkiv, which lies near the front lines, has faced repeated shelling from Russian forces.


Deputy Prime Minister Iryna Vereshchuk said on the Telegram messaging app that there would be another attempt to evacuate women, children and the elderly from the strategic port city of Mariupol, which has been besieged by the Russian forces for weeks and reduced largely to smoldering rubble by constant shelling. .


The Kremlin declared earlier this week that Mariupol was “liberated”, with the exception of the Azovstal steelworks, the last pocket of resistance where Ukrainian troops are entrenched.


Vereshchuk said that “if everything goes according to plan”, the evacuation in Mariupol will begin at noon on Saturday. Many previous attempts to evacuate civilians from the city have failed.


The governor of the eastern Luhansk region, Serhiy Haidai, said on Telegram that an evacuation train will depart from the eastern city of Pokrovsk on Saturday. Residents of the Donetsk and Luhansk regions, which comprise Ukraine’s industrial heartland known as Donbass, will be able to ride the train for free.


This will bring them to the western town of Chop, near Ukraine’s border with Slovakia and Hungary, according to Haidai.


Russia has said that establishing full control over Donbass, much of which has been in the hands of Russian-backed separatists since 2014, is currently one of the main goals of its operation in Ukraine.


Haidai said on the Telegram messaging app on Saturday that residential buildings in the area had been bombed 12 times the previous day, and Popasna “made the most of it”.


“In addition to the fact that street fighting continues in the city for several weeks, the Russian army constantly fires at multi-storey residential buildings and private houses. Just yesterday, local residents withstood five enemy artillery attacks. Not all of them survived,” Haidai wrote.


He added that some houses were also destroyed in Lysychansk and Novodruzhesk.


KYIV, Ukraine – The General Staff of the Ukrainian Army says Russian forces are continuing their “offensive operations” in eastern Ukraine with the aim of defeating Ukrainian forces, establishing full control over the Donetsk and Luhansk regions and to secure “a land route between these territories and occupied Crimea.


In the past 24 hours, Ukrainian forces have repelled eight Russian attacks in the two regions, destroying nine tanks, 18 armored units and 13 vehicles, one tanker and three artillery systems, the General Staff said on Saturday morning. on his Facebook page.


Russian forces continue to partially blockade and shell Kharkiv, Ukraine’s second largest city, and are active in the Izyum region, according to the update.


In the strategic port city of Mariupol, Russian troops “continue to block” Ukrainian units in the area of ​​the Azovstal steelworks, the last remaining stronghold, and “launch airstrikes on the city, including with the use of long-range aircraft”. the post said, adding that an engineering unit has arrived in Mariupol in order to clear the port infrastructure.


KYIV, Ukraine — Another mass grave has been discovered outside Mariupol, the city council and an adviser to the mayor said Friday.


The city council released a satellite photo provided by Planet Labs showing what it said was a 45-meter (147.64ft) by 25-meter (82.02ft) mass grave that could hold the bodies of at least 1,000 inhabitants of Mariupol.


He said the newly reported mass grave is outside the village of Vynohradne, east of Mariupol.


Earlier this week, satellite photos from Maxar Technologies revealed what appeared to be rows upon rows of more than 200 freshly dug mass graves in the town of Manhush, located west of Mariupol.


The discovery of mass graves has led to accusations that the Russians are trying to cover up the massacre of civilians in the city.


KYIV, Ukraine – At least three civilians died and seven others were injured in shelling in the Donetsk region of eastern Ukraine on Friday as Russian forces continue to push into the industrial east of the country, the region’s governor said in a Telegram post.


In a separate Telegram post earlier, Kyrylenko said that on Friday afternoon the Russians opened fire on 20 settlements in the region and destroyed or damaged 34 civilian infrastructure.


Also on Friday, the local prosecutor’s office of the northeastern region of Kharkiv said in a Telegram article that the charred bodies of two residents were discovered near the town of Izyum on the same day. The post accused Russian soldiers of torturing residents and burning their bodies.


WASHINGTON — The Pentagon said U.S. Secretary of Defense Lloyd Austin will convene defense officials and military leaders from more than 20 countries in Germany next week to discuss the immediate and long-term defense needs of the United States. ‘Ukraine.


Pentagon press secretary John Kirby said Friday that about 40 countries, including NATO members, were invited and responses are still coming in for Tuesday’s session at Ramstein Air Force Base. He did not identify which nations have agreed to attend, but said more details would be provided in the coming days.


The meeting comes as Russia prepares for what is expected to be a major offensive in eastern Ukraine.


The agenda will include an updated assessment of the Ukrainian battlefield as well as a discussion of efforts to maintain a steady flow of weapons and other military aid, Kirby said. It will include consultations on Ukraine’s defense needs after the war, but should not consider changes in the US military posture in Europe, he said.


The Russian Defense Ministry said on Friday that one serviceman died, 27 others were missing and 396 were rescued after a fire on the guided-missile cruiser Moskva last week.


The statement comes a week after the sinking of the ship.


Shortly after the incident, the ministry said the entire crew of the vessel, which was believed by media to be around 500 people, had been rescued. The ministry did not provide an explanation for the conflicting reports.


Ukraine said it hit the cruiser with a missile strike.


KYIV, Ukraine — Ukraine’s security chief said Friday that the country’s main battles are in Donbass, the industrial heartland of the east, with Russia deploying more and more troops every day.


Oleksiy Danilov, the secretary of Ukraine’s National Security and Defense Council, told The Associated Press that more than 100,000 Russian troops are currently fighting in Ukraine, including mercenaries from Syria and Libya.


Some of Russia’s elite military units left the strategic Ukrainian port city of Mariupol, which was declared “liberated” by the Kremlin on Thursday, and are now moving east to join the fighting there, Danilov said.


Danilov said an overnight helicopter delivery brought weapons to the steel plant in Mariupol, the last stronghold of Ukrainian forces in the city. He urged Ukraine’s western partners to speed up the delivery of arms to his country.

Loans for graduates. Most Graduate Students Are Strongly Determined by Loans

How to build Naruto’s Sakura