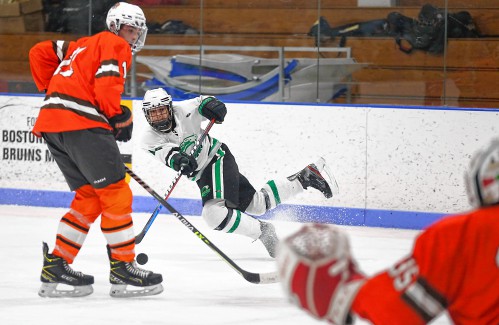 No lead has been secured against the Greenfield hockey team this year.

The links could easily have been losses. Greenfield trailed 3-0 late in the third period against the Brownies and on Sunday was consistently playing from behind against the Orioles.

Instead of giving in, the Green Wave fought back. Greenfield had one of the best one-minute streaks in hockey you’ll ever see against Agawam, with Trevor Kuchieski scoring twice and Shane Prusak burying a shot in 59 seconds to tie the game with four minutes remaining. The green wave didn’t allow another goal, leading to a 3-3 draw.

This came after Greenfield looked dead in the water for most of the match, a comeback that seemed impossible at the time.

“When you see a 3-0 lead in the third period, it’s good to see your team deal with adversity, come together, keep the momentum going and take the lead one goal at a time,” said said Green Wave coach Adam Bouchard. after the game. “It makes you wonder if we had done this for the 45 minutes of the game, what would have happened.”

Doing that for a full 45 minutes is what Greenfield did on Saturday against Drury. The game was tied 1-1 after the first period before the Green Wave broke for four goals in the second period and added two more in the third to claim a 7-1 win. Kuchieski and Sammy Knight each had a hat trick in the win.

It was a completely different game than the one Greenfield played with the Blue Devils earlier in the year, a game in which Prusak ran the length of the ice in the final minute to tie the game 4-4 before MJ Paulin does score in overtime to give the Green Wave a comeback victory. The two programs have played so many close games in recent years that a 7-1 victory was certainly surprising.

Then on Sunday, Greenfield found a way to respond to every Belchertown goal. The Orioles took the lead in the first period, but the Green Wave tied it in the second on Prusak’s stick.

Belchertown regained the lead in the third period, but with two minutes left, Prusak found Kuchieski for a touch in goal to force extra time and an eventual 2-2 tie.

Greenfield’s resilience has been on full display this season and the ability to score goals when he needs them most will pay dividends once the playoffs are over.

The MIAA has released its first power rankings of the winter season, and several Recorder-area schools have positioned themselves to play after the regular season.

Four local men’s teams (Frontier in Div. 4, Pioneer, Greenfield and Franklin Tech in Div. 5) and six local women’s teams (Frontier in Div. 4, Turners, Franklin Tech, Greenfield, Pioneer and Mohawk Trail in Div. 5) are currently ranked in the top 32. The top 32 ranked teams automatically qualify for the state tournament, while any team with a record greater than .500 below the top 32 will also qualify.

What the fields look like for the rest of Western Mass. ?

In div. 4 in girls, Wahconah, Easthampton and South Hadley make up the top three in the standings. Hampshire (#17), Monument Mountain (#19) and Pope Francis (#20) join the Redhawks in the top 32.

Palmer, of the Franklin County League north side, is ranked No. 9 in the division. 5 while FCL South’s Smith Academy is ranked No. 20 in the field.

It is safe to say that Western Mass. is on track to be well represented at the time of the tournament.

Since losing its first three games to open the season, the Turners Falls women’s basketball team has rallied to win six in a row and take first place in the Franklin County League South.

Other teams on a winning streak? Franklin Tech, as many teams will this year, played four games in four days last week due to COVID makeups and after losing to the Thunder on Tuesday won its next three games to keep pace with Turners in the FCL South.

The Tech boys are on a five-game winning streak after starting the season 1-4, setting themselves up for a great second half this season. The Eagles are very much in the HL North mix.