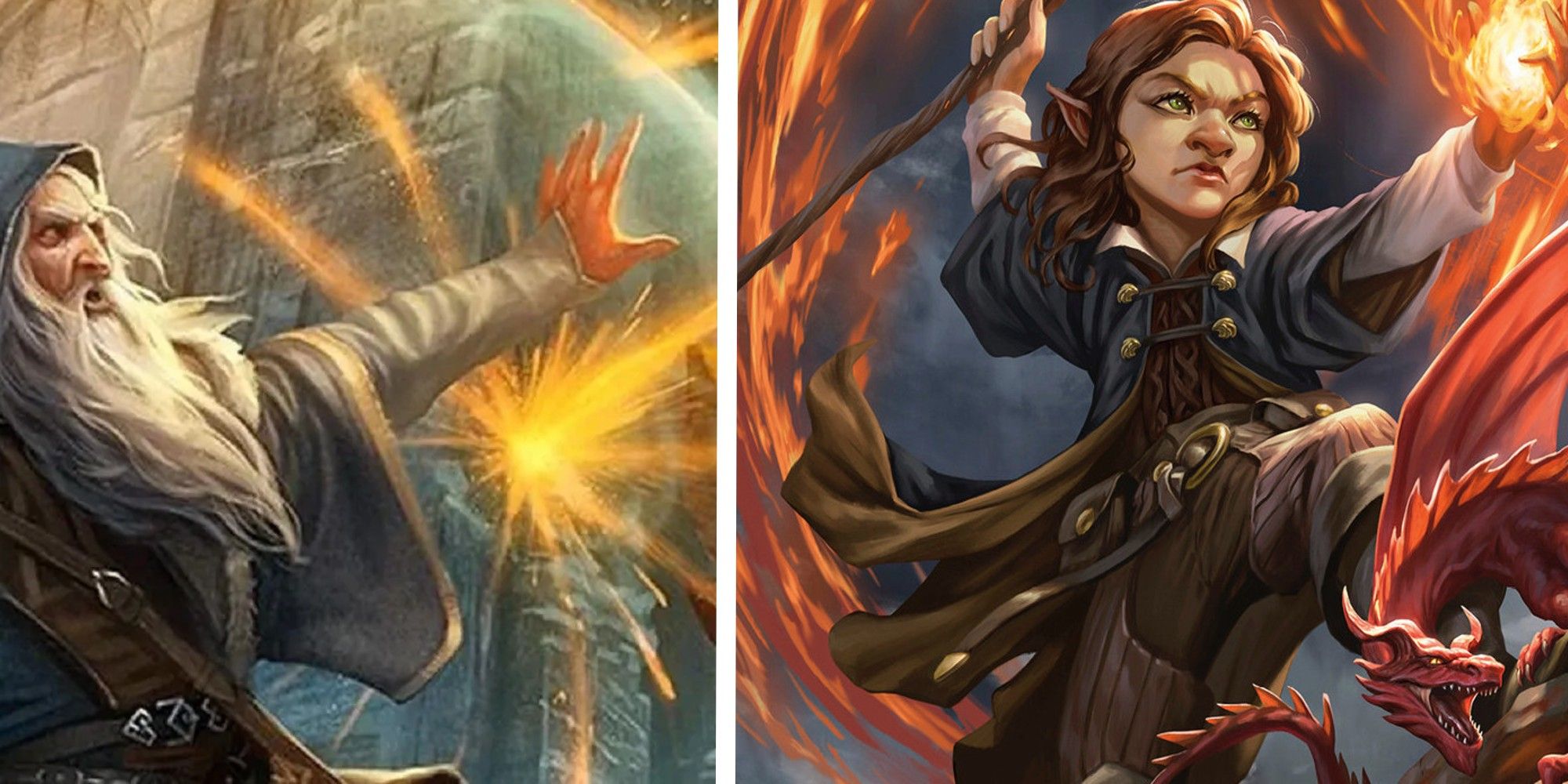 In most RPGs, casters tend to fall into a similar niche of being considered “glass cannons”, which is a term given to those who do massive damage but have little constitution. This is common because low health balances the amount of damage a spell can do. However, this had the unintended effect of relegating spellcasters to the back of the party.

Most don’t watch a caster sitting in the back. After all, those with healing magic generally avoid direct combat, and most offensive spells strike from a distance. That being said, being forced into the back doesn’t appeal to everyone. Fortunately, Dungeons & Dragons offers several spells that allow spellcasters to switch things up to join the frontlines.

Many overlook minor spells as “weak spells” and focus on higher level spells like Fireball or Lightning Bolt. While these spells are slightly more powerful, cantrips are perfectly viable as they scale as the player does. That said, many have the caveat that they do no damage if their target makes a save. Booming Blade is not like that.

When this spell is cast, you make a melee attack against a creature, enveloping it in “overflowing energy” until the start of your next turn. During this time, if that creature intentionally moves more than five feet, it will take 1d8 thunder damage. At higher levels, not only does the damage increase, but the initial hit also gains the same thunder damage.

As noted earlier, casters’ low health acts as a way to balance out their damage, and classes like warlocks and warlocks can’t wear heavy armor. There are spells like Mage Armor and Shield of Faith that can increase the user’s AC, but these are focus spells and can limit what a caster can cast.

The Shield spell, on the other hand, uses your reaction to increase your AC by five until the start of your next turn. Not only does this allow a caster to keep their other focus spells available, but it’s also a substantial increase in AC. As a bonus, this is only a first level spell. Although it cannot be upgraded, this spell is still viable for a caster of any level.

The main downside to melee casters in D&D is their lack of weapon proficiency. Spellcaster classes tend to be proficient only with simple weapons like daggers and staves, which have mediocre damage. Of course, there are ways to acquire skills in martial weapons, but they are both limited and have specific conditions and require players to follow a certain path.

For those who want a little more creative freedom in their builds, the Shadow Blade spell is a great option. Shadow Blade is a second-tier spell that can be cast as a bonus action to summon a sword made of shadows that deals 2d8 psychic damage on a hit. Not only is it good damage, which can be increased, but there are few creatures with Psychic Damage Resistance.

The biggest risk of running any type of caster is the lack of health these classes have. With only a d6 hit die, it’s no surprise that spellcasters are often labeled as “squishy”. Prioritizing AC-boosting spells is one solution, but it’s possible to invest in spells dedicated to both healing and damage.

Vampiric Touch is a melee spell attack that not only deals 3d6 necrotic damage to a target, but also heals you for half the damage done. While not the most efficient way to heal, being able to damage a target while healing at the same time can be extremely useful in some cases.

Most of the spells on this list are dedicated to assisting in close combat, either defensively or offensively. However, as a caster, you are not cut out to be a tank. There are ways to make yourself harder to hit, but they’re not perfect. As such, you’ll need a reliable way to escape combat.

As a bonus action, Misty Step lets you teleport 30 feet into an unoccupied space. Although it lacks the range of Dimension Door, Misty Step is the best option in combat. In addition to avoiding attacks of opportunity, you still have your action to perform a single attack before exiting combat.

While Armor of Agathys is exclusive to the Warlock class, there are plenty of ways for other classes to access this spell. This spell gives the user five temporary hit points for one hour, and when attacked in melee, these hit points are turned into cold damage that hits the attacker.

It might look rather lackluster, especially for a high-level campaign, but Armor of Agathys scales very well. The number of temporary hit points increases by five at each level the spell is cast. Not only does this increase your health pool, especially at later levels, but it’s also a viable way to deal damage to those you fight at close range.

4 Hold a person/Hold a monster

The bane of every melee fighter is enemies that can fly. No matter how much damage you can inflict, it means nothing if you can’t hit an enemy. While there are a plethora of spells meant to hit enemies from a distance, melee-focused spellcasters need a way to keep an enemy locked in long enough to inflict damage and there are two spells that do just that. do perfectly.

Hold Person and Hold Monster are designed to trap humanoids and monstrosities respectively. If a target fails its save, it becomes paralyzed. Those with this status are not only trapped in place, but all attacks against creatures with the paralyzed status are made with advantage and any melee attack that hits becomes a critical hit.

Movement is always important in combat, especially when you need to get close to an enemy. Much like Hold Person, all damage in the world means nothing if you can’t hit your target. With the Haste spell, your movement doubles and you get some additional bonuses.

In addition to the increase in movement, haste grants a plus two bonus to AC and an additional action. This action can be used to attack a weapon, dash, hide, or disengage. Although you lose the ability to move and act the turn after the spell falls, the versatility of this spell far outweighs the drawbacks.

The vast majority of damage spells, especially at higher levels, in D&D are classified as long range. They can be cast up close, of course, but the vast majority of them damage anything around the spell’s epicenter. All those hammers in the stereotype that the casters should stay on the back. Luckily, there are higher level spells that can put you in the center of the fight.

Although only a fifth tier spell, Steel Wind Strike is a fantastic option. When cast, you choose five targets and make separate melee spell attacks against them. On a hit, the target takes 6d10 Force damage. and you can teleport within five feet of any of the targets, even if you miss them. Not only is this spell’s damage high, but it also offers excellent mobility options.

While this spell requires a significant dip into the wizard class, it’s definitely worth it. It’s a sixth level spell, so it doesn’t have the raw potential of Prismatic Spray or Wish, but it’s useful nonetheless. As its name suggests, the spell is not an attack but a transformation that grants a myriad of bonuses.

You gain 50 temporary hit points, proficiency with all armor, shields, and weapons, advantage on attack rolls, bonus attack, advantage on Strength and Constitution saves, and all weapon attacks gain an additional 2d12 Force damage. You can’t cast any spells while Tenser’s transformation is active, but you really don’t cast them. With this spell alone, you’re practically a boss monster.

Next: Dungeons & Dragons: Underrated Magic Items That Are Better Than You Think