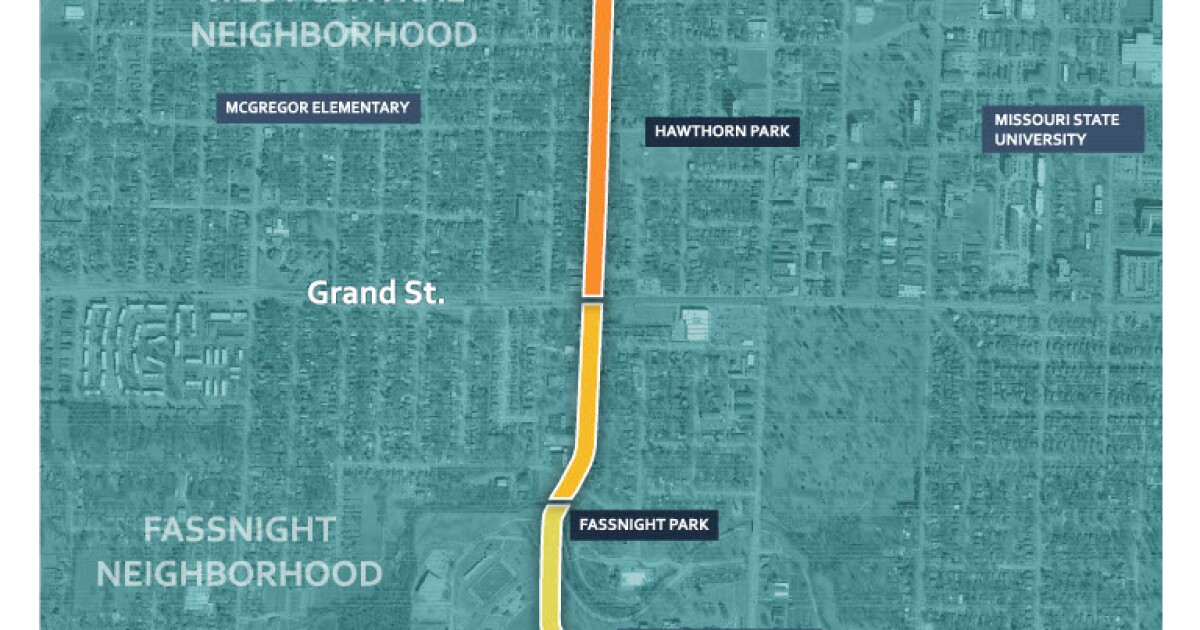 The walk will pass through two neighborhoods close to the heart of Springfield: West Central and Fassnight. Some parts are really nice. Other parts are really rough. At the meeting, City Council member Mike Schilling said it was the first time the project had been shared in person.

“It’s going to be a beautification project, really, from Sunshine all the way to downtown and hopefully kind of give a quiet lane, bikes, low-speed pedestrian facilities,” Schilling said.

The $26 million city improvement is mostly funded by $22 million in federal funds, part of a Trump-era plan to encourage development. The rest of the money is a local game. In 2019, Missouri Senator Roy Blunt said the boardwalk would help jobs and the local economy, in part because new businesses were incentivized to locate nearby.

Plans include business incentives, utility upgrades and a new 3-mile trail for bikes and pedestrians. The walk goes from Mother’s Brewing to Bass Pro Shops, roughly.

The afternoon before the town hall, I walked the boardwalk from north to south to hear the thoughts and opinions of people in the neighborhood.

I started my afternoon hike at Mother’s Brewing Company, where I found Jasmin Adams working on her laptop while the bartenders started tossing beers. Adams said she lives in West Central.

“I look forward to the improvements to come,” Adams said. “I think it will be great for this community and just connecting the middle ground between the south side and the north side.”

Some residents haven’t heard of Grant Avenue Parkway yet

Crossing the street, I found a barber shop full of customers. Few of them had even heard of the walk, including Springfield resident Lonnie Bollinger.

He said, “I have no idea what’s going on with Grant, but I’m interested in why the city is paying for this instead of fixing the roads in Springfield.”

At a laundromat three blocks away, Laura Gowen also said the Grant Avenue Parkway was new to her.

“I lived here for eight years,” Gowen said. “It’s not that bad of a place to stay. I never heard of the boardwalk until you mentioned it.

Then I met Barbara Strader, a homeless resident. Strader was resting at a gas station near a busy intersection, using his smartphone.

She said: “I think they need to work on some of the things that need to be fixed and one of those things is, obviously, dealing with the homeless. There are more homeless people here every day, and it seems like no one wants to do anything about it.

And further down the road, I met owner Bob Carrow. He said he’s lived in his home, about half a mile from what is now Wonders of Wildlife, since 1963. His block is full of trees, flowers…and traffic.

“I live on Grant Street,” Carrow said. “I’m concerned about traffic. They’re going to build a roundabout in Portland and Grant. I don’t like that idea because it’s going to slow down traffic, and – I mean, I like the idea that it’s going to slow down traffic, but I can’t get out of my driveway right now. Traffic is really dangerous on this street. We have people going up and down this street at 60, 70 miles an hour, and it’s a residential area.

Later that afternoon, about 50 people came to the town’s block meeting held at Parkview High. They shared a mixture of hope and skepticism about the walk.

I spoke to Kathleen Cowens, a resident involved with the West Central Neighborhood Alliance. She said she hopes the project will lead to improvements at a park near Grant Avenue.

“We’ve been very strong in asking that some of the properties just west of Hawthorn Park in Madison be purchased and extend the park to the project,” she said.

Cowens added that she was eager to make improvements that would make the sidewalks usable for people with disabilities. Telephone poles stuck in the middle of the sidewalk make it very difficult for people in wheelchairs to get around, she said.

“All the utilities will go underground so there won’t be a problem obviously and they’ll expand and do these sidewalks I’m sure to code with the distance but yeah now if you walk Grant – if you are in a wheelchair you must go to the street.

“Something really creative” coming up?

Later in the meeting, West Central owner Donna Alrutz engaged in a dialogue with Tim Rosenbury, director of quality initiatives at the Springfield venue. Rosenbury was appointed to the newly created post just before the pandemic hit.

At the meeting, Alrutz told Rosenbury that local residents have submitted many interesting ideas for the project to the city government, but she thinks the boardwalk project will look like a sidewalk with a roundabout.

Rosenbury said residents might be surprised how quickly a $22 million grant can be spent on necessities like buying property and improving public services. Installing signage, monuments or other new equipment would cost even more, he said.

“About $8 million of that is for utility relocation,” Rosenbury said. “About 5% of the $22 million is for creating places. »

The day after the meeting, I had Alrutz on the phone. She said she actually thought the city’s place-making czar answered her questions “beautifully.”

She had concerns about the look of the new business and the development, but she also thinks the city’s remake of Grant Avenue Parkway could open up new possibilities.

“There just isn’t enough money,” Alrutz said. “I understand after thinking about it a lot since last night that this is, this is the start, hopefully, of something that will turn into something really creative, but as far as what’s on paper, it’s not that creative.

The city says construction downtown will begin in early May and utility upgrades on Grant Avenue will begin a few weeks later. A launch event will take place during the week of May 16.