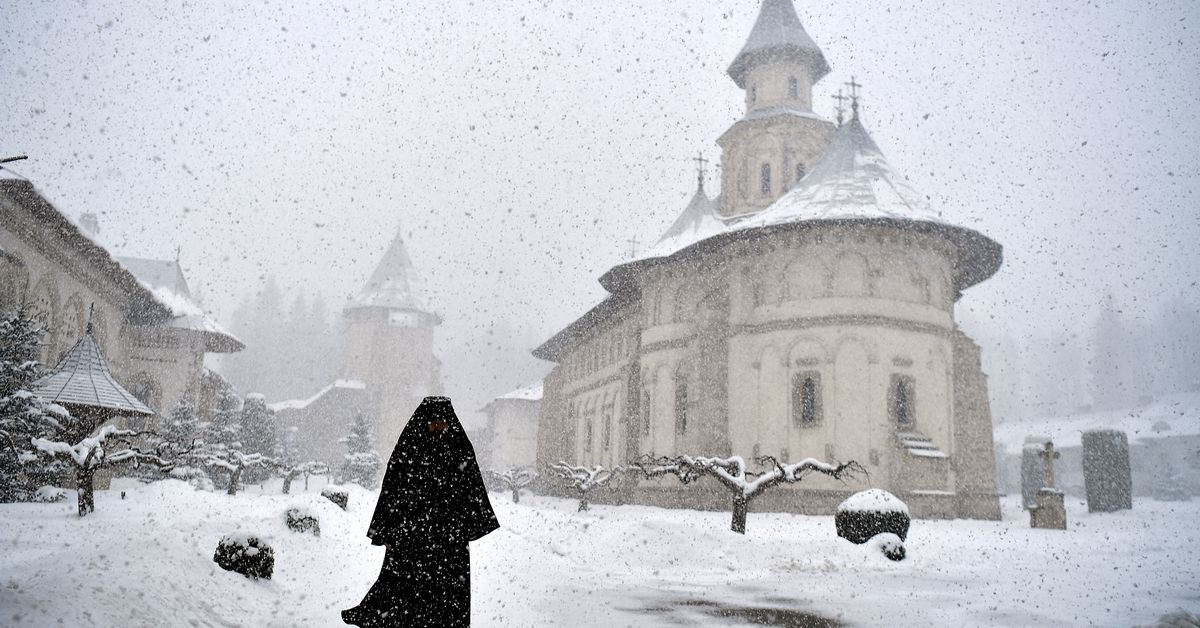 PUTNA, Romania, March 16 (Reuters) – When Svetlana, 75, and her family from the town of Krivoy Rog in central Ukraine reached the snow-capped Putna Monastery in the rolling hills of northeast Romania, they were on the road for four days.

Monks living in the 15th-century Romanian Orthodox monastery, a pilgrimage site in a valley covered in dense forest, have opened their doors to people like Svetlana who have fled Ukraine to neighboring countries by the millions since Russia began its invasion on February 24.

Of these, more than 400,000 have already entered Romania, and the number is expected to rise as Russia pursues what it calls a “special operation” to demilitarize and “denazify” Ukraine. Ukraine and its Western allies call this a baseless pretext for a war of choice.

Svetlana left her hometown with her daughter Anna, her 6-year-old grandson Maksim and two other female relatives. Anna’s husband and two siblings stayed behind, helping with humanitarian aid.

“We would go home in a second, our souls are so heavy,” Svetlana said. “We are sorry that we had to separate from our family. At this time we are feeling fear and confusion, we don’t know what to do next.”

As she cried, Father Gherasim Soca quietly embraced and comforted her. Later in the day, villagers braved a snowstorm to attend a service where monks prayed for the Ukrainian people inside the large stone church with glittering icons.

“The majority of people want to reach their final destination, usually somewhere in the west, as soon as possible, and if they can, they choose to stay overnight near border towns,” Fr. Gherasim said.

“Putna is a bit more remote, but for those who are not in a hurry, they are not crowded here, each family has their own room. I see them going to church and praying, comforting each other, it helps a lot.

(Open https://reut.rs/3qwBKZF to see the photo package about the monastery)

More than 412,000 Ukrainians have fled to Romania, where thousands of volunteers, churches, non-governmental organizations and government agencies are providing food, shelter, clothing and transportation.

In northeastern Romania, the Orthodox Archdiocese of Suceava and Rădăuți offered hundreds of beds in monasteries as well as parish houses. They also have a permanent presence at the Siret border and at the adjacent station, including priests and monks who speak Ukrainian or Russian, offering food and assistance.

“A large proportion of Ukrainians go to relatives who work abroad,” said Father Alexandru Flavian Sava, spokesman for the archdiocese. “For them it is more comforting to move forward than to stop so close to the border and the violence beyond.”

Father Gherasim said around 100 people, mostly women and children, have so far taken refuge in Putna.

Among them was a couple who ran with their baby from Ivano-Frankivsk. The father used his double Romanian passport to leave, as Ukrainian men of conscription age are not allowed there.

“We have a little girl, we left because we are afraid for us and for her,” said the father, who wished to remain anonymous. He said they came to stay in Putna before running further west because they had already been there.

“We are scared because we don’t know how it will end.”

Drugs in Hawaii’s prisons: “We’re swimming in spices, and nobody cares”