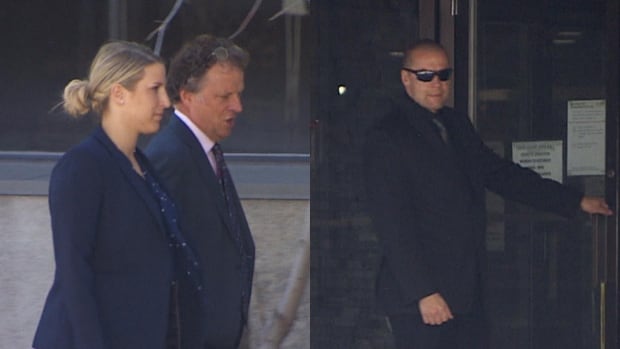 The second witness in the trial of two Yellowknife RCMP officers charged with assaulting a prisoner said Tuesday he never felt the prisoner posed a threat.

const. Francesca Bechard and Cpl. Jason Archer are each charged with one count of assault for their use of force against prisoner Tracella Romie in 2020 at the Yellowknife Detachment.

In testimony Tuesday, Const. Nicholas Alpaugh told the court that Romie was “drunk” and “agitated” when he and Const. Robert Gossmann, who also testified this week, arrested her at a Yellowknife liquor store on October 14, 2020.

In video footage from inside the vehicle, Alpaugh can be heard at the liquor store telling Romie to get in the back seat or he would “drag” her by her “fuckin’ hair” into the vehicle.

Alpaugh testified that after being placed in the back of their police cruiser, Romie began kicking the rear door from the inside. He said she was kicking so hard that the vehicle started rocking.

“I wasn’t afraid that she would hurt me at any time,” Alpaugh said when asked if he had ever felt threatened by Romie. “I didn’t feel like she was going to come after me.”

The two officers drove Romie to the Yellowknife Detachment. In video recorded from inside their police vehicle, Romie can be heard shouting profanity from the back seat. At one point, she says she’s going to “f–k up” the two officers.

When they arrived at the detachment, Archer and Béchard came out of the building to meet them. In his testimony, Gossmann told the court that Archer opened the vehicle door and began talking to Romie.

Surveillance video from the bay leading to the detachment and an aerial camera on the roof of the building show Alpaugh pulling Romie out of the vehicle and onto the ground.

Béchard then approaches and the two officers help Romie up. None of the posting videos have sound. After being pulled from the vehicle, Romie’s pants had come down to her knees. Béchard then remounts them before escorting him into the detachment.

With Bechard and Alpaugh on either side, Romie is led into the enclosed bay before the detachment’s reservation area. At one point, the video shows Romie turning her head and shoulders towards Bechard. Bechard then forcefully drives Romie into the booking area and pushes her against the wall.

“She was actively resisting. She’s not trying to run away, she’s just shooting. She doesn’t want to go where she’s led,” Alpaugh said of Romie’s behavior.

Video from inside the booking area shows Bechard pushing Romie against the wall. She then places her gloved hand over Romie’s mouth and turns her face to the wall.

Gossmann testified that officers are trained to put their hands over a prisoner’s mouth if they believe they are going to spit on him.

With Romie against the wall, the videos show Archer entering the booking area and taking control of Romie’s hands which are handcuffed behind her back. At this point, Romie is held against the wall by Archer and Bechard while Alpaugh and Gossmann stand a few feet behind them.

Archer then pulls Romie’s arms behind her back so they’re just above her shoulders.

Gossmann testified that this is often done to try to control a prisoner. Alpaugh testified that Archer took his arms “quite high” up and held them there for “a few minutes”.

Alpaugh said the maneuver was never part of his RCMP training.

“She wasn’t going anywhere. She was obviously resilient but she was handcuffed,” he said.

The video then shows Bechard beginning to fondle Romie. When she’s finished, Archer begins to remove his handcuffs. When his left handcuff is removed, Bechard places Romie’s hand on the wall above his head.

Archer then removes the right handcuff but continues to hold Romie’s hand behind his back. A few seconds later, Romie turns her head and shoulders towards Béchard and lowers her left hand. Bechard then pushes Romie back against the wall.

Bechard then hits Romie in the head.

Turning to an officer in the face of a “threat index”

On Monday, Gossmann testified that he was shocked by Bechard’s use of force, but during cross-examination he admitted that Romie turning to Bechard was what the RCMP calls a “threat indicator.”

Alpaugh testified that he did not see the punch because his back was turned at the time.

He testified that he felt like he and his fellow officers had “total control” of Romie the entire time.

During his cross-examination of Gossmann, Bechard’s attorney, Robb Beeman, called the punch a “distracting punch.”

Gossmann agreed that such “strikes” were used by the RCMP to regain control of a prisoner.

Alpaugh is to be cross-examined on Wednesday.

The trial is expected to end on Friday.

Akshay Kumar says he and Twinkle Khanna ‘don’t interfere’ in each other’s lives: ‘We think in two opposite directions’