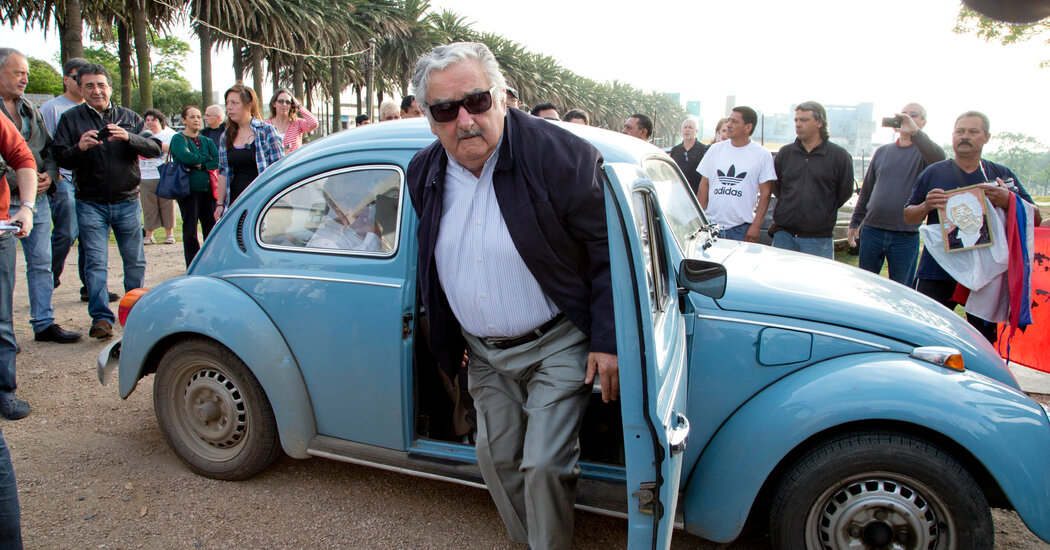 Political prisoner restores his mind by talking to a frog

THE PRESIDENT AND THE FROG
By Caroline De Robertis

The story of José Mujica, President of Uruguay from 2010 to 2015, is one of extraordinary political reconciliation. Mujica was a leader of the Marxist guerrilla group known as Tupamaros, which was admired for its ideological seriousness and saw itself as the vanguard of change: their radical communiques and Robin Hood-style heroic acts went , they thought, to provoke a popular uprising that would lead to the overthrow of the government and a new Uruguay.

In the late 1960s, when the Tupamaros were the epitome of revolutionary cool, their strategy seemed to be working. But in 1970 the government cracked down, murdering guerrillas. They responded in kind and a predictable spiral of violence followed. Mujica was shot six times by police before they could arrest him. Three years later, the military seized power, unleashing a state reign of terror over the population, and support for the Tupamaros turned to resentment. It was not until the end of the dictatorship that Mujica was released from prison in 1985. He entered mainstream politics and 25 years later, having charmed the country with his modest lifestyle and style. energetic and spontaneous campaign, he was elected deputy of Uruguay. 40th president.

The main character in Carolina De Robertis’ fifth novel, “The President and the Frog,” is a thinly veiled version of this unusual man. When De Robertis takes up the story, he is quite simply “the ex-president”: retired and octogenarian, living in quiet reflection on his wife’s small farm. He’s still an international celebrity – because of his lifestyle rather than the relatively submissive progressive policies he enacted in power. His circumstances are so humble that they are almost a form of ostentation. As head of state, he refused to reside in the presidential palace and preferred his old Volkswagen Beetle to the usual black limousine. Like Mujica’s, all its worth was the Beetle’s meager value. The novel opens with the arrival of a young Norwegian journalist to interview him, one of the many reporters he has entertained since leaving office; “The poorest president in the world” makes a good copy.

The mystery of “The President and the Frog” is how its protagonist survived 13 years of torture, interrogation and extreme isolation before he came to power, a story he has never fully disclosed. Something about this sympathetic Norwegian moves him, and, “to his surprise”, he “felt the past rise in him with roaring fullness … this closed secret, this underwater story of 40 years ago”. He won’t tell the story to the interviewer, but he will tell it to us. As the interview progresses, a double conversation ensues: a live conversation with the interviewer and a silent conversation with himself.

The latter constitutes the core (and soul) of the novel. The president was confined alone at the bottom of a well, living in the mud, without a latrine, his meager meals went down to him in a bucket. With the revolutionary movement in tatters and a ruthless dictatorship in power, he believed salvation was impossible: “Hope was scratched.

The real Mujica has spoken candidly of losing her sanity under similar conditions – of his paranoia and auditory hallucinations in escalating torment. De Robertis imagines him in the depths of this psychosis, painfully bringing his mind together through a series of conversations with a frog. Although the prisoner does not recognize him as such, the frog is an aspect of himself, pulling him to memory, as he searches for an area of ​​warmth and kindness which, if he can kiss him firmly enough, will allow it to endure.

De Robertis describes herself as Uruguayan American and her feeling for the country runs deep. But his admiration for his protagonist is so absolute that it sometimes reduces him to a set of blameless and bloodless ideals. His homilies on the sole concern for the well-being of the “people” become repetitive. His admission that he is not “perfect” is issued without proper consideration of where the imperfections might reside. When the interviewer asks him an interesting question about the paradox of an anarchist turned head of state, the president’s response is “There is paradox everywhere”, and unfortunately the topic is dropped.

Yet it’s a touching and deeply felt novel, especially in the president’s atrocious (and at times humorous) encounters with his oddly healing frog. De Robertis boldly invites us to imagine a man’s Promethean struggle to regain control of his shattered psyche under the most extreme circumstances possible.