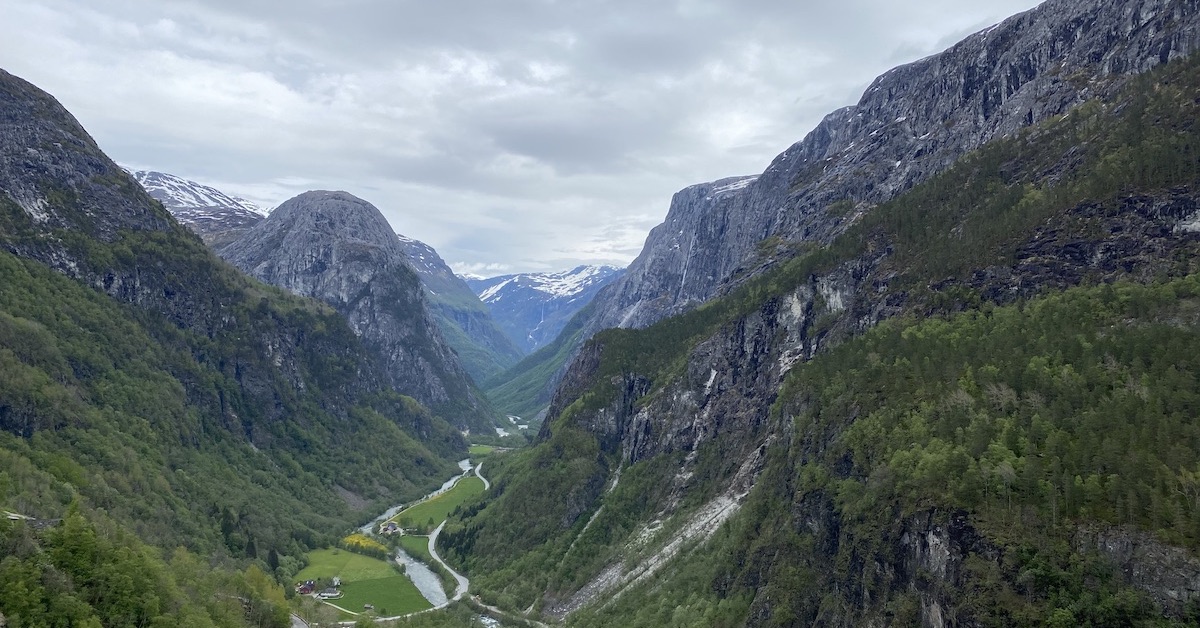 A two-week Viking lands cruise took my husband and I to breathtaking scenery along the beautiful Norwegian fjords and across the Baltic Sea.

We spent the night in Stockholm, Oslo and Bergen, which I’ve covered separately (with Bergen to come). I loved the eight destinations below because of the quaint cobbled streets of the old towns, medieval charms, and Scandinavian cultural riches of each destination. Enchanting royal palaces, gothic cathedrals, captivating mountain views and cascading waterfalls are unforgettable. Let’s explore together.

The Swedish-speaking town of Mariehamn is the capital of Åland, an autonomous territory under Finnish sovereignty. The scenic archipelago spans over 6,700 islands and is located halfway between Finland and Sweden. The city’s Viking heritage is celebrated every year with the Viking Market, one of Scandinavia’s most important events. The city center, founded in 1861, is located between two ports and offers a variety of restaurants, cafes and shops.

Explore Mariehamn’s maritime heritage at the Åland Maritime Museum. Visit the medieval church of Lemland. Historians discovered 12th-century murals depicting the life of Saint Nicholas during a renovation project in the 1950s.

Visit the Pellas Museum, birthplace of Captain Sven Erikson, the last captain of the Herzogin Cecilie. The Herzogin Cecile was a German-built four-masted windjammer built in 1902 and one of the fastest sailing ships ever built.

Gdańsk is famous for its Gothic cathedrals and glowing amber. In medieval times, Gdańsk was one of the most prosperous cities of the Hanseatic League, a Baltic trading power. Explore the city’s rich history in the remarkably restored Old Town, an impressive mix of Gothic, Baroque and Renaissance tendencies. Along Long Market Street, discover the royal residence of Green Gate and the 15th-century Artus Court, a merchants’ palace. Discover the Fountain of Neptune and the Church of St. Mary, which took more than 159 years to build.

The most notable structure is the Gdańsk Wheel Crane, a 14th-century human-powered machine that loaded and unloaded goods. At the Amber Museum, learn about the fine gemstone, the medicinal uses of amber, and the history of ancient trade routes.

Visit the world of the Teutonic Knights, the famous medieval German military order, as you enter Malbork Castle. Completed in 1406, Malbork was the largest brick castle in the world, a UNESCO World Heritage Site. Explore the grand exhibition halls adorned with armour, carvings, ceramics and dazzling Baltic amber.

Don’t miss the Stutthof concentration camp, east of Gdańsk, the first camp built outside Germany’s borders. Visit the prisoners’ barracks and pause to pay your respects at the camp memorial.

Pro tip: Complete your visit with traditional Polish pierogies and a glass of Goldwasser.

Bornholm is nicknamed Sunshine Island and Rock Island for its climate and geology.

The village of Rønne was founded as a fishing village on Bornholm around the year 1000, playing a vital role in the maritime trade of the Baltic. The Swedes, Germans and Soviets have ruled the island throughout its history. Today, Ronne is home to talented craftsmen who craft long-cased grandfather clocks and create blown glass pieces. Explore the cobblestone streets in search of merchant crafts in the red-roofed houses.

We headed north along the coast to the abandoned cliff-top fortress of Hammershus, the most extensive castle ruins in northern Europe. The Melstedgard Agricultural Museum was once a farm, where today you can see Bornholm’s old-fashioned farming techniques and food culture. Observe the farm animals up close and taste the farm products.

Venture into Almindingen, one of Denmark’s largest forests, towards the medieval church of Osterlars. We explored the 14th century frescoes and carved altarpieces inside the historic whitewashed Round Church.

Don’t miss seeing the sleek, modern Bornholm Ferry that travels across the sea to nearby towns.

Our ship docked at the Warnemunde Cruise Center and we chose to visit the Hanseatic city of Rostock, Germany, a fishing village with spectacular medieval architecture. We visited the 13th century town hall, originally built in the Gothic style but transformed in the 18th century by the addition of a Baroque facade and an old banquet hall. We saw the gothic St. Mary’s Church with its cross-shaped basilica and discovered the Astronomical Clock, built in 1472 by Hans Duringer.

Rostock’s Cultural History Museum is housed in the Cistercian Abbey and Convent, supporting a chapter of nuns since the Reformation in 1562.

Don’t miss Warnemunde Beach in the seaside resort and district of Rostock, one of the widest beaches on the German Baltic Sea coast. Stretching for almost three kilometers and bordered by a promenade, the beach is home to beach bars, a surf school and a children’s playground.

The Danish capital of Copenhagen is known as the ‘City of Spiers’, church spiers and palace towers. Amalienborg Palace is home to the Danish Royal Family, Crown Prince Frederik, Crown Princess Mary and their four children. It consists of four identical classical palaces with rococo interiors around an octagonal courtyard. Frederik’s Church, or the Marble Church with the green copper dome, is on the west side of the square, with the statue of King Frederik centered in the courtyard.

Walking along the harbor we visited the Little Mermaid statue and the Gefion Fountain, a depiction of a large group of oxen pulling a plow driven by the Norse goddess Gefjon. Nearby you will find Saint Alban’s Church, or the English Church, built from 1885 to 1887, the only Anglican church in Denmark.

Visit the fourteen-storey modern Copenhagen Opera House, among the most modern opera houses in the world, built at a cost of 2.5 billion DKK (Danish crowns).

Pro tip: The Copenhagen Card offers free entry to 89 museums and attractions, free public transport throughout the metropolitan area and the possibility of bringing two children aged 0-11 for free.

Founded by the Vikings in the late 900s, the historic town of Aalborg is located nearly 20 miles up the Limfjord at its narrowest point. The country’s fourth largest city, Aalborg, was founded as a trading post. Here you will find the best-preserved Renaissance architecture, including Jens Bang’s House, built in the Renaissance in 1624. Alborghus Castle, the seat of the modern governors of North Jutland, is the finest example of mansions in half-timbered.

Stroll through Utzon Park and visit the Church of Our Lady, which houses one of the original 12th-century church bells. Visit the charming old town, see the 14th-century Gothic Budolfi Church and the historic Baroque town hall.

Discover the fascinating Churchill Club, the first Danish resistance group formed in the city to support the Allied forces in their challenge to defeat Hitler.

Aalborg is known for its best aquavit spirits, infused with herbs or spices.

Port of southern Norway, Stavanger (rhymes with “banger”) is home to the largest concentration of wooden buildings in Europe dating from the 17th and 18th centuries. A reserve formed in the 1950s protects more than 250 structures after developers threatened to destroy historic homes. Wander the cobbled streets of the pedestrian area of ​​Gamle Stavanger, or Old Stavanger, explore the smoked sardines and canned herring museum to a present-day chocolate factory.

Benefiting from an offshore oil drilling boom in recent years, Stavanger has acquired a cosmopolitan flair and was honored in 2008 as the European Capital of Culture. Browse fascinating exhibits on technology, geology and petroleum energy exploitation at the Norwegian Petroleum Museum.

Take a helicopter ride to the famous Pulpit Rock, a huge flat rock that towers 1,928 feet above Lysefjorden, or take a cruise and hike to see the giant monument.

The picturesque village of Eidfjord sits in the heart of Norway’s most scenic fjords. From the Norwegian Sea, the waters of the Hardangerfjord lead to the charming mountain hamlet. I took a seven-hour trip to the quaint coastal village of Flam, from the shores of the Hardangerfjord to the Sognefjord, crossing scenic mountain passes and traversing long tunnels along the way. I saw my first roundabout inside a tunnel. The Tvinde Waterfall cascading down the steep cliff was spectacular.

Stop for lunch at the beautiful Stalheim Hotel, with its spectacular view over the Naeroy Valley. At Flam, we boarded the railway for a breathtaking ride, climbing nearly 3,000 feet through 20 tunnels and over numerous bridges. After changing trains at the top of the mountain at Myrdal, we continued along more thrilling vistas towards Voss, amidst snow-capped mountains, forests, lakes and rivers.

Take a scenic drive along the Eid River, famous for salmon and trout fishing. At Hotel Fossli, follow the path to the thundering Voringsfossen waterfall, which drops 600 feet to the canyon below. In the Sima Valley, board a catamaran for a leisurely cruise along the green hills to see the Kjeasen Mountain Farm, one of the most isolated settlements in the country. The house took 30 years to build, with materials being transported piece by piece.

For more information on the cruise, see these articles: