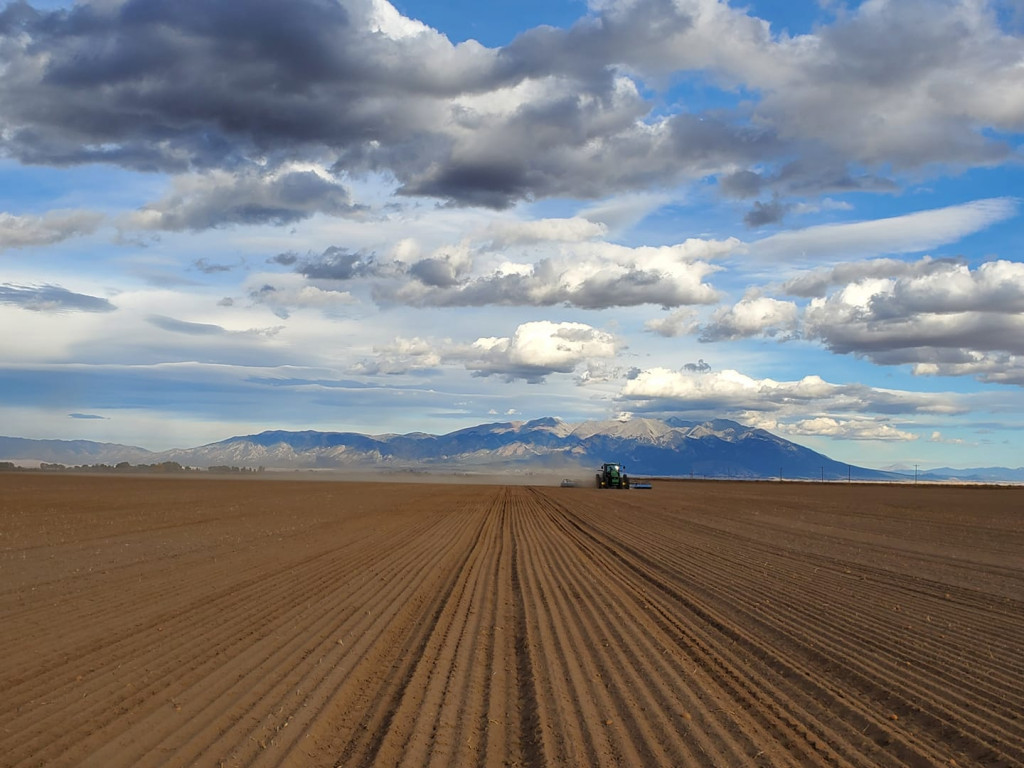 Mineral County Miner | All eyes are on sub-district # 1

EDITOR’S NOTE: This is the first of a two-part look at Sub-District # 1 – past, present and future.

ALAMOSA – From her family’s farm near Mosca, Erin Nissen can see the large sand dunes in the distance. Whether through a window or from the porch, the towering 700-hundred-foot sand ridges are always in sight, a constant reminder of what she fears.

“This is how we might end up if we’re not careful,” says the fourth-generation farmer. “If we continue to drain the aquifer like we did, our farm could end up being all sand.

Nissen, 30, has reason to be anxious. Drought and over-pumping by some farmers have drained water levels in the aquifer to almost unprecedented levels, leaving the San Luis Valley at a crossroads and local water officials faced with a decision which could put some farmers out of business.

Nissen runs Nissen Farms with his father, Lyle, who other producers in the valley describe as “a head and shoulders above everyone” when it comes to sustainable farming.

“Twenty years ago Lyle was doing things nobody thought of,” says John Kretsinger, a farmer and rancher who bought land in Alamosa in 1989 because it had one of the most responsive aquifers in the country.

In the years before Kretsinger transplanted from Texas to Colorado, the valley was rich in farms growing a cornucopia of vegetables – turnips, spinach, broccoli, carrots, and lettuce. By the late 1940s, the valley was producing huge crops of peas with full wagons trucked up every week.

Don Shawcroft is a 64 year old rancher who raises cattle in Conejos County. His family came here in the 1800s, and the valley he remembers is a far cry from the valley he sees now.

“When I was a kid there were places where the ground was so swampy you couldn’t cross on horseback,” Shawcroft says. “The water that came out of some of these wells that were dug in the beginning would flow directly into the air and over the house. Those days are over. All that water was pumped out of the ground.

Today, with just 7 inches of rain a year and “barely half the groundwater that was available just a decade ago,” everything on Nissen’s farm – every seed they plant, every decision they make. ‘they take – “is based entirely on water,” Nissen said.

Decisions like adding radishes and green manure to the soil so that it retains more moisture. And choose crops based on how much water they need and when they need it. And track the amount of water the farm is pumping, down to 0.08 inch, and record that amount each day. And, in fine, to calculate the quantity of water that they can put back into the water table, whether it is via refill basins or other surface water, to replace what they have withdrawn.

“We’re doing different things all the time so we can keep cutting back. But it’s hard, and it’s getting harder and harder, ”says Nissen.

Although the father and daughter have full control over their own farming practices, they are part of a group of 300 farmers tied together due to collective aquifer depletion.

The water bureaucracy can be a snoozer, just like hydrology. So, for the sake of this story, suffice it to say that the group, referred to as Subdistrict No. 1, was formed as a political subdivision and legal person in 2006 by surface water rights holders and groundwater in Alamosa County and parts of Rio Grande and Saguache counties – the heart of this alpine desert valley – specifically for the purpose of taking action to restore what is known as the “free aquifer”. This is the water table closest to the surface, which should not be confused with the “captive aquifer” several layers deeper underground.

The crux of the collective – and why people far beyond the San Luis Valley and even Colorado state borders are watching it so closely – lies in the idea that, because there is too much of farmers who depend on a finite and shrinking layer of groundwater in a period of prolonged drought and climate change, all who use that water are inextricably linked.

About half of the members of sub-district 1 are farmers who, like the Nissens, are committed to sustainable agriculture. The other half do not pump and continue to pump more water from the aquifer than it returns to it.

It doesn’t matter what members grow or how they grow it, no matter if their families have worked the land for generations or if a farm or ranch was bought last year by anonymous hedge funds, members of the sub- district have come together in hopes of keeping their water out in the hands of local authorities rather than those of state water regulators, who have the power to shut down their wells.

The collective actions of sub-district 1 could ultimately have more impact on the future of the Nissens farm – or any other – than the actions of the farmers themselves.

In Colorado, hydrologic dynamics aren’t the only powers and factors farmers need to fear when they remove more water from the soil than they put back. Water Resources, to intervene and close irrigation wells when farmers are not living within their means. This is the power that the state will use.

During a severe drought in 2002, farmers in Adams, Weld and Morgan counties along the South Platte River were locked in a legal battle over the overuse of groundwater by farmers for the irrigation, which impacted the rights of farmers who depended on surface water for irrigation. The state engineer stepped in and closed wells – 8,000 of them – until farmers using the groundwater could come up with a plan to replace the water they had depleted, reducing the need for water. injuries to key holders of surface water rights. The closures have been devastating for farmers and their communities. And for the owners of around 2,000 wells, the impact was permanent since the wells were never relighted.

Three hundred miles to the southwest, farmers in the San Luis Valley watched the state’s response along the South Platte as it unfolded in 2002, and what they saw was is the writing on the wall. State groundwater regulations were forthcoming, and water levels in the aquifer, monitored since 1976, were of great concern. In the 2002 drought – the worst on record in the valley – the withdrawals caused an unprecedented decline of nearly 400,000 acre-feet. Levels continued to decline, reaching nearly 800,000 foot-acres in 2006.

Cleave Simpson is a fourth generation farmer and rancher from San Luis and head of the Rio Grande Water Conservation District. As he recounts, his community realized that the state might as well step in and shut down their wells, and that they had to find a way to collectively manage their aquifer.

“I can’t say what was on the minds of these South Platte farmers. I think they were aware of their problem, but they didn’t react aggressively enough, ”says Simpson. “We were determined to have a different result. We were going to find our own solution.

This determination – and the decision to create the sub-district in 2006 – was motivated by two factors:

Closing the valley’s 3,000 free aquifer wells until its water levels are restored would mean the suspension of almost all agricultural production for at least a year, if not more. A year of inactive farming and ranching would rob the valley’s economy of $ 400 million to $ 500 million each year and devastate not only producers, but other businesses and local governments as well. Property values ​​would also likely drop because farmland depreciates when their wells are marked red and water is turned off.

The likelihood of such closures increases every year as aquifer levels continue to decline.