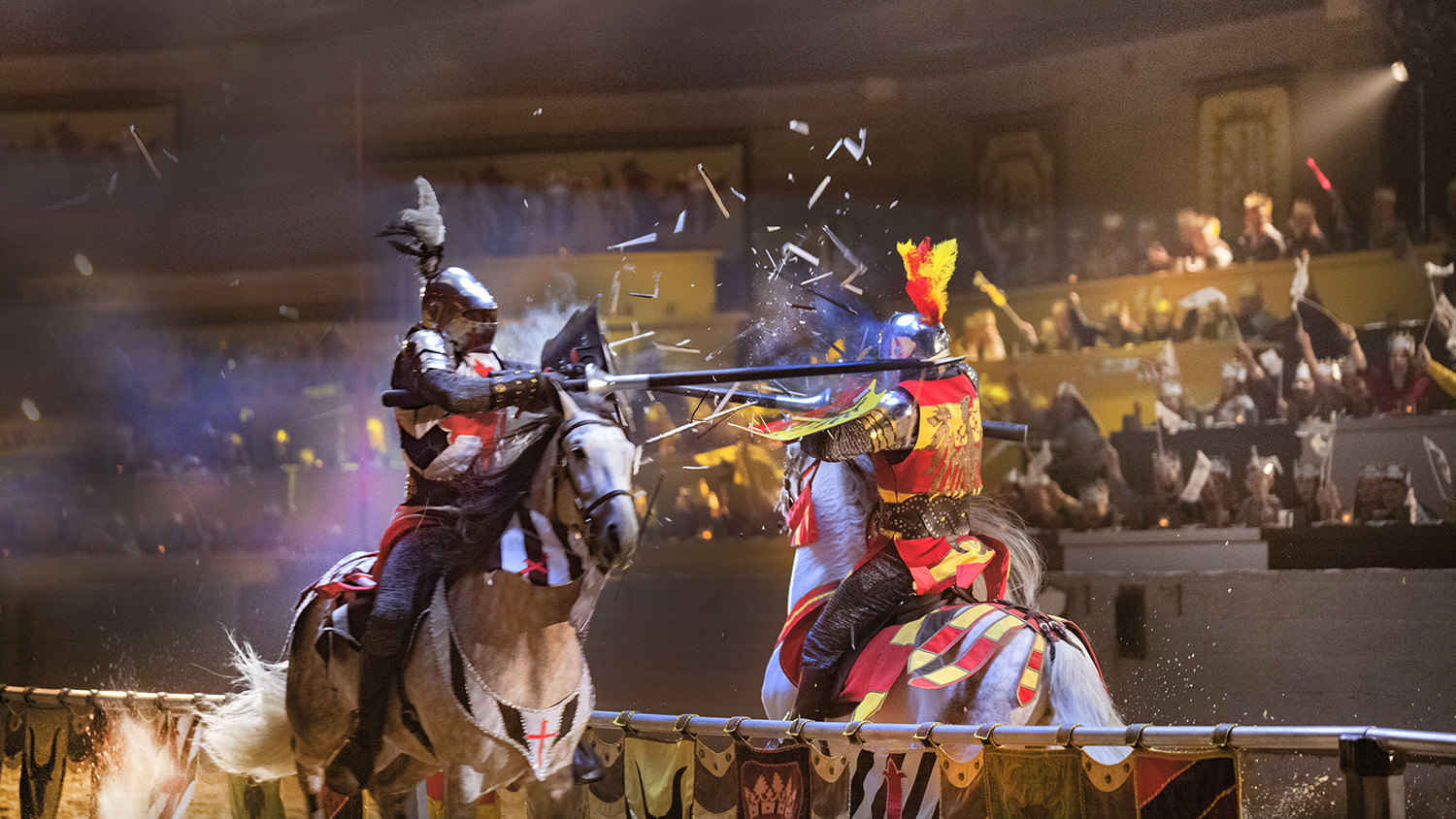 Knights jousting on horseback at Medieval Times in Scottsdale.

Small business owners said one of their toughest issues in February was finding help.

So what about a company that needs to hire athletic performers who can fight on horseback while working weekends and holidays?

But before new recruits can compete for the title of Defender of the Realm, they must start as a Squire.

Joseph Toma felt drawn to the recent casting call for budding performers by a chance to take part in mock battles on the sandy floor of a colorful oval-shaped arena surrounded by people seated at banquet tables .

“Play every little boy’s childhood dream, which is medieval combat. Who doesn’t want to fight with swords, to be honest. It doesn’t matter how old you are,” he said.

Toma is 26 and looks the part. He’s built like a superhero and isn’t afraid to ride a horse.

“I grew up going to horse camp in the summers. I worked with horses all through high school,” said the fitness and health trainer who enjoys skydiving.

Experience in high-intensity situations means Toma isn’t fazed by the idea of ​​performing stunts in costume in front of 1,000 feasting people. He came to the cast interested in joining a nearly 50-year-old company that started in Spain.

But it would have to be the right fit.

“[I’m] not currently looking for a job. I currently do a lot of online training. Perfectly happy with what I’m doing there,” he said.

Last month, nearly 180,000 leisure and hospitality workers were hired across the country, leading to a strong February jobs report.

But the National Federation of Independent Business still found that nearly half of surveyed owners had vacancies they couldn’t fill.

A place looking for help features feasting and sword fighting. Medieval Times has 10 locations in the United States and Canada. The castle on the Salt River Pima-Maricopa Indian Reservation had a bad time and opened months before the pandemic.

In 2022, companies are struggling to pay their workers enough to keep them.

Up a large ramp from the Medieval Times arena are stables for the horses that perform in the show.

Most are Andalusian, a rare breed in the United States that was bred in the Middle Ages.

As Chief Knight, it’s Edward Maciejczyk’s job to train the animals and squires to play safely in the show. The orientation was different when he first wore armor.

“Back when I started, you just threw yourself into it. So your first day, you were already dressed. You went there and you were killed,” he said.

Maciejczyk compares certain stunts to skateboard tricks he used to do.

Knights battle on horseback at Medieval Times in Scottsdale.

The key to riding safely is knowing how to stay calm when the crowd is roaring, your heart is racing and the horse is watching your body language to know how to react.

“We teach you how to motivate yourself, not how to get out of it,” Maciejczyk said.

From its casting, Medieval Times hoped to hire 8 to 10 artists.

Twenty people showed up for an interview.

Among them was Toma, a physical trainer and paratrooper with a passion for horses.

“I think jousting looks really fun to be quite honest. Best of all,” he said.

Toma said shortly after the casting call that Medieval Times had offered him a job.

But as much fun as he thought the sword fight would be, he turned it down. The salary offer was around $30,000 – a figure a Medieval Times spokesperson could not confirm.

Toma said he wouldn’t do it for less than what he earned as a bouncer. A job he recently left, leaving another position to be filled in the service sector.