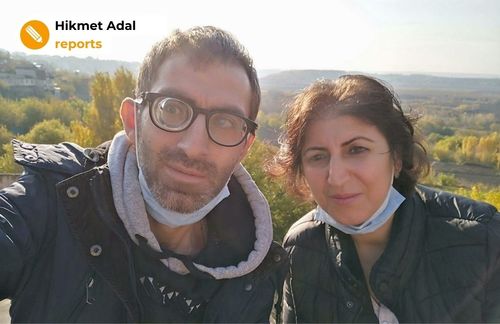 â€œIt was July when I was able to see my son for the last time. We spoke on the phone yesterday. He looked worse. I asked, ‘Aren’t you feeling well yet?’ He said to me: ‘Mom, I am still not well. I try to sleep all the time so as not to feel my pain. How much I can sleep … It is also a riddle’. “

Devrim AyrÄ±k is a 31-year-old sick prisoner. He was released three times in connection with the trial for “[terrorist / illegal] member of the organization “since 2015. But every time he was released he was imprisoned again.

In 2017, when he was first arrested, he suffered from Crohn’s disease (a type of inflammatory bowel disease). Before he was imprisoned, his intestines had been partially removed. He relapsed in prison; he had another surgery and part of his intestines was removed again.

When the COVID-19 pandemic arrived in Turkey in March 2020, he was placed under house arrest because his life was in danger. However, this was only the case for 10 months. He has been arrested since January 2021.

HÃ¼lya AyÄ±k, the mother of Devrim AyÄ±k without vision in one eye and myopic 30 degrees in the other, asks for the release of her son so that he can be treated. The above remarks are made by HÃ¼lya AyÄ±k.

Noting that her son is being held in EskiÅŸehir Type H Prison, HÃ¼lya AyÄ±k says she has not been able to see her son for months. Because the family lives on Antalya’s Side in the Mediterranean region:

When prison visitation bans due to the coronavirus are added to that, visits become nearly impossible.

“They can’t take care of my son there”

Mother HÃ¼lya Ayik says she spoke to Devrim AyÄ±k on the phone the other day (October 31) and that they had the following conversation:

â€œWe talked about his illness. He looked sick. I asked, ‘Are you still feeling bad?’ He said, ‘Mom, I already feel bad all the time.’ He said, “I now try to sleep all the time so that I don’t feel my pain. How much can I sleep … It’s also a puzzle. I’m still in bed. “

â€œHis treatment became much more difficult after his incarceration. His illness progressed further.

â€œHer doctor said to her, ‘Try not to have the operation for the third time. If you have another operation, it will be very difficult to get out of it. ‘ But his wounds are getting bigger every day, the ulcer has spread, 1 meter of his intestines has already been removed, he can no longer have an operation.

â€œHe was hospitalized in early October. He remained in the hospital for 10 days. He had a colonoscopy there and the doctors saw that his disease had progressed too far and that large wounds had opened. He is now being treated with injections and nutritional supplements in prison, but if my son has another surgery it will mean he will have to live with a bag.

“They can’t take care of him there.”

HÃ¼lya AyÄ±k says she has filed dozens of requests for her son’s release; however, none of his complaints were found to be admissible. Likewise, the petitions presented by her son and her lawyer were also not accepted. AyÄ±k is concerned about the conditions of detention:

â€œDevrim now lives thanks to the support of his friends; they can support him. But every time he goes to the hospital, he has to go through the quarantine process, which makes things more difficult for him. He’s already taken the wrong doctor all the time.

â€œWhile he is supposed to be taken to a gastrologist, he was taken once for general surgery and once for internal medicine. Both doctors said it was not in their area of â€‹â€‹specialization and fired him. only quarantine each time. His quarantine period was extended by being sent to the wrong doctor and he was left alone.

“Prison is no different from dry land”

Noting that her son will appear before the judge on November 4, HÃ¼lya AyÄ±k says: â€œWe never give up hope. We are waiting. We are waiting for a surprise. Maybe my son will come see me, at least with a house arrest. “

Mother AyÄ±k recalls that her son is the only defendant arrested in the trial which has been taking place since 2015; the other two defendants have never been found: “There is no concrete evidence in the file, no eyewitness … The statements of anonymous witnesses have been refuted. There is no technical supervision, nothing … Devrim is arrested despite all of this. “

Concluding her remarks, mother HÃ¼lya AyÄ±k emphasizes that the laws do not allow such long periods of pre-trial detention and adds:

â€œSince 2015, the other defendants in the case have not been found. If these people are not found, will my son die in prison? Is this justice? They should at least separate the files of these two people and decide on Devrim. Why are they making us wait any longer?

How to get sheep in Minecraft Dungeons