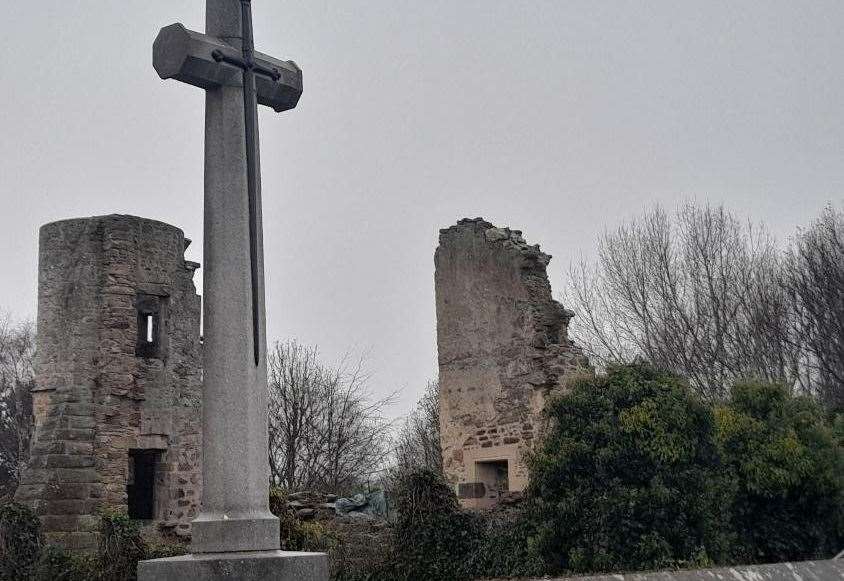 THE FINAL phase of a nationally significant historic project has been completed in a local village.

Contractors Masonry and Lime have refurbished the chimney of the Abbot’s House North Chimney at Kinloss Abbey on behalf of Kinloss Abbey Trust (KAT).

KAT administrator Kirsteen Mitcalfe confirmed the total cost was around £10,500-6,000, including a grant from Historic Environment Scotland.

She said: “The chimney is essential to the stability of the whole chimney and gives a sense of the building at its peak.

“This would have been a key feature in the Abbot’s Private Chambers, but was reinstated primarily for structural reasons, helping the whole stack to resist a tendency to twist and/or tip due to the wind.”

Most of the work was done with stones fallen from the house itself, but a new lintel had to be imported.

“The Witton Fell sandstone used instead is quarried in North Yorkshire and matches the Clashach stone very well.”

The abbey was developed over several centuries, culminating in a final renovation and extension by Abbot Robert Reid – one of Scotland’s foremost religious and political leaders – in the mid-16th century, before the site disappeared after the Reformation.

Kinloss Abbey Trust was founded in 2003 to raise awareness and preserve the remains.

KAT has now provided planning permission to investigate and move stones inside the compound of the Abbot’s house.

The group hopes to recruit volunteers interested in archeology to help alongside a team from Highland Archeology Services.

“Consent to the planned monument in place to move the stones provides a unique opportunity for volunteers to gain hands-on experience under supervision,” Kirsteen said.

“Who knows what interesting archeology is hiding and waiting to be discovered!”

The next step is to consolidate the stack and vaults that support part of the Abbot’s House, including replacing the temporary shoring installed in 2019 with permanent repairs and reconstruction.

Conservation architect Nick Brown suggests: restoring the missing parts of the vaults from in situ stone; close the southern ends of the vaults to form a solid wall; and add load to the roof of the vaults, incorporating finished waterproofing with stone slabs or turf.

KAT will need consent and funding for this to move forward.

Kirsteen said: “With the stability of the masonry pier improving, the next phase of repairs will be to replace the temporary shoring of the vaults below, which was installed in 2019, with permanent repairs and rebuilding.

“Plans for the project will be drawn up during this year, with a view to carrying out the works in 2023.”

Meanwhile, ethnobotanical researcher Anna Canning has agreed to return to the abbey in May to offer two foraging sessions and an evening lecture on medieval ailments and cures.

Guided tours of the Abbot’s House – usually restricted to the public – proved popular last year. We hope they will return this summer.

They’re the best Oscars hosts ever