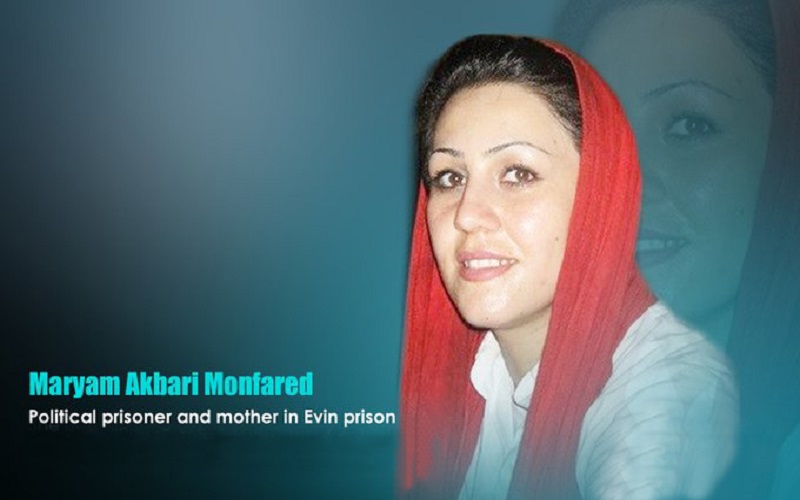 Reports from inside Iran’s Semnan prison indicate that political prisoner Maryam Akbari Monfared’s health is deteriorating day by day. According to the order of the regime’s intelligence ministry, to increase pressure on Monfared, prison officials refuse to send him to hospital for medical treatment.

For 11 months, Monfared has been suffering from liver disease. Due to his condition, the prison doctor ordered him to eat only specialized foods for patients with liver disease. However, so far, the regime’s officials have not allowed him to get the prescribed food.

As a result, she was forced to eat bread and cheese most of the time. Even his requests to buy food from the prison shop were refused, worsening his condition as his liver reached a dangerous state. Despite numerous reminders from her family to transfer her to Evin prison, the authorities did not respond. Monfared was suddenly exiled to Semnan Prison on March 10, 2021.

The regime’s judiciary did not react to the aftermath, and none of the judicial institutions accepted responsibility for his exile or gave a reasonable response regarding the decision to exile him.

Ms. Monfared is currently serving a 13-year prison sentence. During these years, she was repeatedly deprived of the minimum rights of a prisoner, even those included in the regime’s law. Indeed, the regime has consistently denied having political prisoners, calling them security prisoners instead.

Monfared was initially arrested on December 31, 2009, following the violent 2009 protests in Tehran. Indeed, she fought to expose the regime’s crimes during the 1980 and 1988 massacres and demanded justice for executed political prisoners while continuing to support ongoing popular protests.

At that time, the regime accused her of making phone calls and meeting with members of her family, who are members of the People’s Mojahedin Organization of Iran (PMOI/MEK). At the time of his arrest, MEK members were stationed in Iraq at Camp Ashraf.

In June of the following year, Monfared was sentenced by Branch 15 of Tehran’s Revolutionary Court, headed by notorious judge Abolghasem Salavati, responsible for numerous death sentences, to 15 years in prison.

Over the years, the regime has executed four of its siblings. Two of his brothers were executed in the 1980s at a very young age, accused of having connections and being members of the MEK. Another younger brother and sister were executed in the summer of 1988 in the massacre of 30,000 political prisoners. The regime’s judiciary announced that his younger brother’s crime was selling Mojahed publications. In her youth, Monfared was forced to spend her childhood visiting her family members in the regime’s prisons and cemeteries.

In October 2016, she took the bold step of filing a formal complaint with the Attorney General of Tehran regarding the executions of her brother and sister. She had repeatedly stressed that she would never give up her fight to hold this regime responsible for its crimes and human rights violations, as well as to demand justice for the fallen political prisoners.

Ms. Maryam Rajavi, President-elect of the National Council of Resistance of Iran (NCRI), has repeatedly reiterated the need for an international delegation to visit the prisons of the mullahs’ regime and meet with prisoners, especially political prisoners. Mrs. Rajavi urged the UN special rapporteur on violence against women to investigate the health conditions of Maryam Akbari and Golrokh Ebrahimi Eraei.

Every legacy dungeon, ranked by difficulty