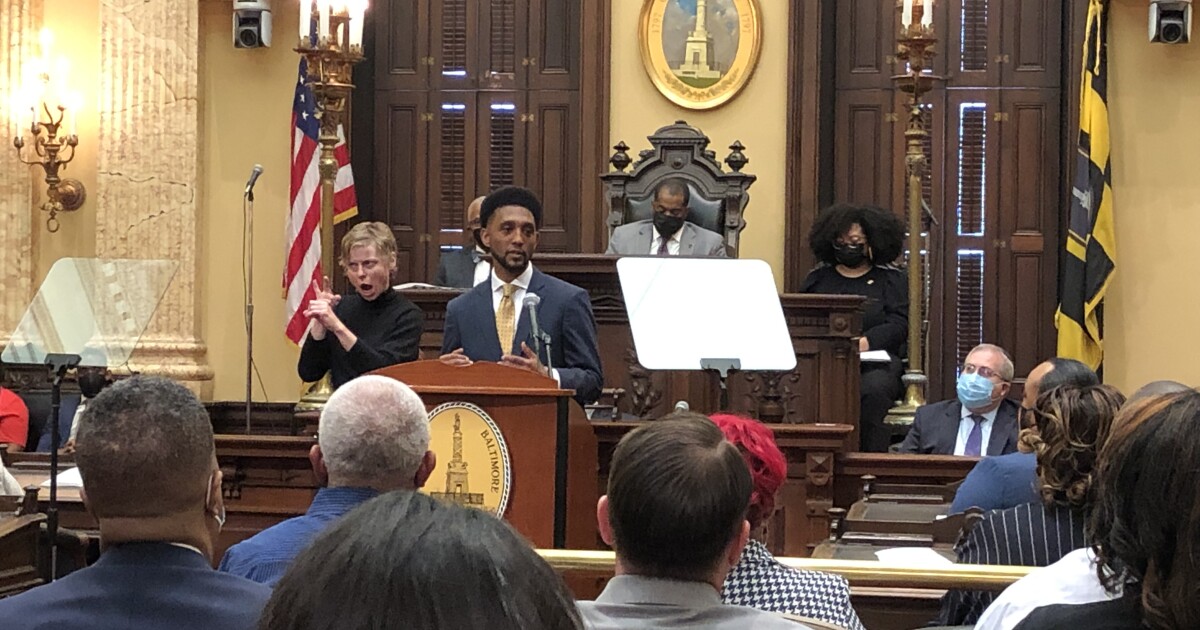 In his State of the City address, Scott calls for a ‘new era’ of public safety

Baltimore Mayor Brandon Scott outlined his vision for improving public safety in his second annual State of the City address on Tuesday.

It was the first State of the City address a mayor has delivered from City Hall since 2019, when former Mayor Catherine Pugh was still in office.

Last year, Scott spoke in front of a small audience of employees.

This time, he spoke in the city council chamber, which was packed with masked council members and agency heads, including state attorney Marilyn Mosby.

Scott said the city is on “the verge of a long-awaited renaissance.”

“When I came to power, the city government was broken and rotten to the core, due to years of dysfunction, turmoil and misplaced focus,” he said. “We have to start from scratch and build new systems from the ground up.”

The mayor opened his speech with a moment of silence for first responders and public safety workers who have lost their lives in the line of duty.

Scott said the city continues to be plagued by gun violence as it recovers from COVID-19, which he says is “not over.” While thanking the Baltimore Police Department for making the city a “safer place,” he also called for a “reinvention” of policing in the city.

“If we continue with the status quo, we will continue to get status quo results,” he said.

Among the new initiatives announced by Scott was a “smart policing program,” under which officers would spend less time dealing with non-emergency situations so they could combat violence. Scott said he will reveal more about the program in the coming weeks.

The mayor drew critical of progressive activists who hoped he would redirect police funds to resources like housing and education.

District 8 Councilman Kristerfer Burnett, who supported the redirection of funds, said he thought the criticism was “reasonable”.

But he said he understands why Scott is taking a “more balanced approach,” as long as the mayor doesn’t fund the police at the expense of other programs.

“At the end of the day, one of the things I hear from my constituents is that they want more police presence, they want more visibility and they want them to be able to solve crimes” , Burnett said. “Our customs clearance rate is too low. So we don’t solve crimes. We are not doing an efficient job.

And Burnett said Scott went beyond the police in his speech as a crime reduction strategy.

“Hearing a mayor, for the first time, really lift this holistic lens, this lens of equity and reinvestment in communities that have been disinvested for a very long time, was encouraging and exciting to hear,” he said.

Part of his vision, Scott said, to “truly strengthen public safety” is to create more opportunities for young people. He announced plans to invest more than $65 million in the city’s school system and touted a $120 million investment in Baltimore City Parks and Recreation.

He also highlighted his efforts to address housing inequities, including a $100 million allocation from ARPA fundsand a sales tax exemption program the city launched to protect owner-occupied properties.

Scott also announced that West Baltimore businessman David Bramble has reached an agreement to acquire Harborplace, once the center of Baltimore’s waterfront redevelopment and now a struggling retail space in receivership.

In reviewing these initiatives, the mayor repeatedly issued a call to action: that a better Baltimore requires collaboration.

“The responsibility to prevent violence lies with all of us. Not a single person, not a single agency,” Scott said.

City Council Deputy Speaker Sharon Green Middleton agreed that everyone has a role to play. She said the mayor presented a “great start”, in what she said could be one of the longest speeches she has seen since joining the council. Scott spoke for almost an hour.

“Now it really is time for all of us to roll up our sleeves and get to work,” she said.

City Council will hold its next meeting at City Hall on April 25.