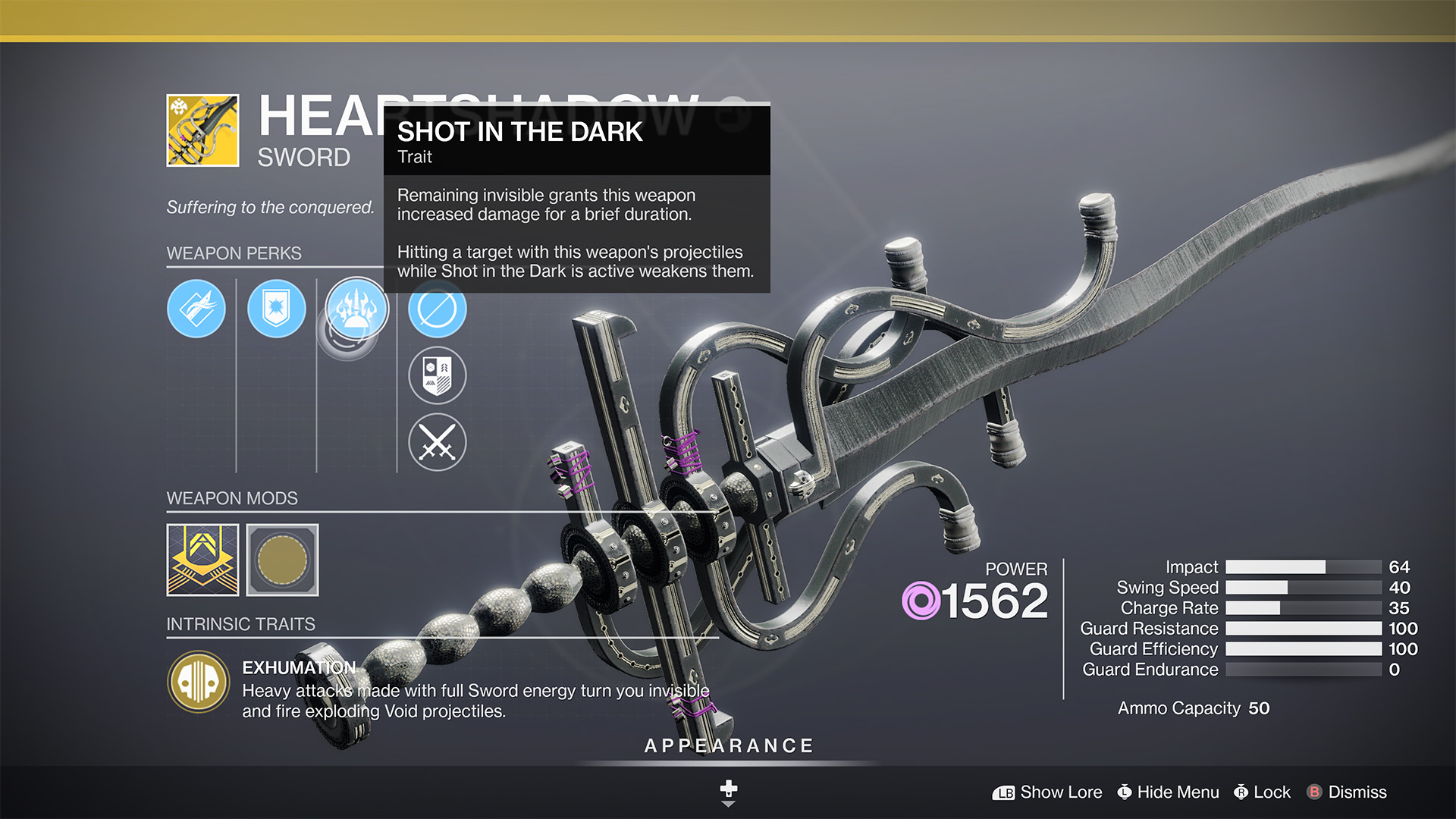 Haunted Season in Destiny 2 wouldn’t be complete without Heartshadow, the most evil sword in Destiny history. This exotic blade looks like something a villain from a Highlander movie would use to chop off his head. In short, it’s exactly the kind of thing you want and need to look cool while slaying the enemies of mankind. Here’s how to get Heartshadow.

Heartshadow can only be found at the end of Duality, the new high-level dungeon that debuted with Haunted Season. This dungeon will send you and your squad into the mind of the Cabal Emperor Calus to face the nightmares of foes and allies. It’s a series of challenging encounters leading to a realm-hopping battle against a surprising final boss.

We won’t divulge who this boss is, but you’ll have to make the effort to find out for yourself. This is because Heartshadow can only be found as a random drop after defeating this final mysterious boss and clearing duality. As with most Exotics that drop randomly, the chances of it dropping are unknown, but you can expect it to be rare. Combine that with the fact that you can only get credit for clearing this dungeon once per character per week, and you should be prepared for the possibility that Heartshadow could take weeks to acquire.

The good news is that there are things you can do to increase the chances of Heartshadow dropping at the end of the dungeon. In your menu, you can explore various Triumph seals. Locate the Seal of Duality and you’ll see that three of the Triumphs have a reward that increases Heartshadow’s drop rate. Solo Thoughtsealer requires you to complete duality on your own. Master Thoughtsealer tasks you and your fireteam with beating the dungeon on Master difficulty, and Mind Heist is completed by finding Calus’ 12 repressed memories hidden in Duality.

OK, you’ve unlocked the most death metal-like sword Destiny 2, But what is that for ? Heartshadow has a two-part advantage when using a fully powered heavy attack called Exhumation. First, it makes you invisible. Then it fires a set of explosive void projectiles. It also has a perk called Shot in the Dark, which can apply a damage buff to your sword and weaken enemies, causing them to take extra damage.

The Heartshadow Catalyst can be earned by returning to Duality once you’ve unlocked the sword. Look for three enemies with yellow health bars labeled “Failed Assassin”. Each time you kill one, it will drop a Standard (looks like a stick). Pick up the Standard and plant them on special plates. It’s worth it, as it increases your sword’s ammo reserve and grants the “Wraithwalk” perk, allowing you to move faster while invisible.