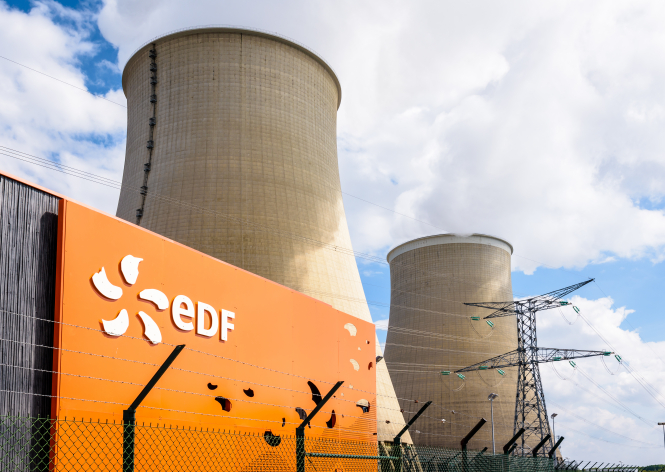 Emmanuel Macron has announced his intention to launch the construction of six new nuclear reactors by 2050, as well as studies for possible eight others.

He also wants to extend the life of existing reactors beyond 50 years in what he calls the “French nuclear renaissance”.

Mr. Macron’s vision of “regaining control of [France’s] energy and industrial destiny” could be a winner with his electorate, but he comes up against the proposals of most left-wing presidential candidates, who want to reduce the use of nuclear power.

New reactors will add to the waste dilemma

However, solutions to deal with the waste already produced by existing power plants are still struggling to get out of the starting blocks – and there are no plans for what would be done with waste from another 14 potential ones.

Bruno Sido, Senator Les Républicains (right) and member of Opecst, a committee of deputies and senators which monitors the way France manages its scientific and technological choices, declared: “France has been thinking about this question for 30 years. .

“It’s not done yet but we’re getting there.”

France already has 56 reactors on 18 sites, which provide almost three quarters of the country’s electricity.

Read more: “I am an environmentalist and I believe in the power of nuclear energy”

The current goal is to be free from fossil fuels by 2050 in line with the European Green Deal, which defines nuclear energy as a form of sustainable green energy.

Mr Sido said reviving the nuclear program was “exactly the right decision” to make, given the environmental context and energy supply problems caused by Russia’s invasion of Ukraine.

Read more: France and Germany are preparing for the Russian gas cut: what will be the effects?

“We absolutely must regain our energy independence,” he said.

However, at present, none of the waste from French nuclear reactors is treated in a sustainable manner. All the waste considered to be radioactive, i.e. nearly two million cubic tons, is stored on the surface, in treatment centers and swimming pools, or surface storage.

About 60% of this comes from reactors and the rest comes from medical, research, military and other sources.

Other waste, which includes items such as tools, clothing, mops and medical tubing, is not highly radioactive, according to Sido.

He hopes the rules will be relaxed in the future to allow such material to be destroyed, buried or recycled.

More problematic is what to do with France’s medium- and high-level nuclear waste.

Buried waste could be treated in the future

In 1998, a site near the village of Bure in Meuse in northeastern France was chosen as the final storage location for the bulk. It will be stored half a kilometer underground in an extensive network of tunnels and galleries known as the Deep Geological Repository (DGR).

The system is recoverable, meaning the waste can be disposed of again if future generations find a better way to dispose of it.

It is an original idea of ​​Andra, the French Nuclear Waste Agency.

The facility will be large enough for all the nuclear waste accumulated so far, but on-site surveys, administrative procedures and opposition to the program, including lawsuits and civil disobedience, have slowed its opening.

Elsewhere in Europe, Finland and Sweden are advancing on their own DGRs, which will be housed in granite.

American geologist Fred Spiegelberg said: “The problem with granite is that it almost always has a fracture system that can allow water to move through the rock.

“We store our waste in the United States in shale.”

Deep underground storage could be in three years

The Bure DGR will store the waste in galleries dug out of compacted clayey rock that is 160 million years old. Known by its French acronym, Cigéo, the project currently owns 84% ​​of the 665 hectares needed to build the facility.

The Meuse prefecture issued it a declaration of public utility (DUP) in December – a formal recognition that a proposed project has public benefits that must be obtained for most major construction and infrastructure projects before work can begin.

Once the Council of State has given its agreement, the Prime Minister can sign his own DUP. Andra will then have the power to obtain the rest of the property it needs.

In the meantime, work has continued with the digging of shafts and galleries to test reversible waste disposal techniques for up to 100,000 years.

The prime minister is not expected to approve until after the presidential elections, but the final green light could be three years from now as the rigorous and independent Nuclear Safety Agency studies the permit application to move and store spent nuclear fuel and other radioactive materials.

Nevertheless, Cigéo’s activity remains high. This year, a 1,700 m² building, named L’Eclipse, is under construction to house the companies working on the underground tests.

A 100 m long cavity will also be dug to test technologies and conduct experiments. This is the length that each cavity must have for intermediate level waste, often solidified in concrete.

The nuclear authority hopes to start storing this type of waste in 2025.

It is impossible to bury highly radioactive waste. This is transformed into a glassy substance, but then requires a cooling period of at least 50 years.

Senator Sido said: “It is true that the most recent batches cannot be stored in their current state. They are too hot and need a cooling period of several decades. But the first batches can be stored now.

The remaining high-level waste may not arrive until 2060. By then, France will again have produced at least as much nuclear waste. For this, it could be led to create a new underground installation.

“As far as I know, there are no ongoing projects for high-level, long-lived waste that will be produced in the future,” Mr Sido said.

Greenpeace France: The fight against climate change is our priority

Candidates for the 2022 French presidential election divided on nuclear energy

France turns to small nuclear for its future

From the Great Stink to your kitchen sink…