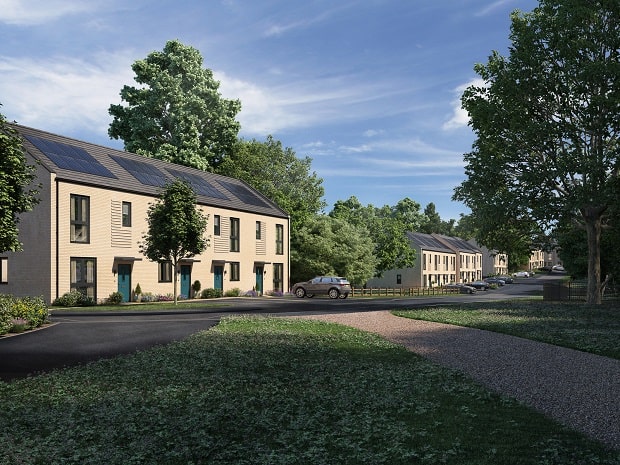 The first homes at the Westwood Lodge site in Poorhole Lane will go on sale this week.

The development of 153 modular homes was approved in May 2021. An initial proposal for the site had been rejected by Thanet council in August 2015 but was approved on appeal by the planning inspectorate in February 2017.

However, former applicant developer Places For People Homes Ltd withdrew from the scheme and in 2020 Rooksmead Residential Ltd agreed terms with L&G Modular Homes on a revised set of proposals.

L&G Modular Homes has made a series of changes, including moving new construction away from existing buildings and keeping more trees on site. Habitat and biodiversity features were also added as part of a ten-year forest plan.

The Westwood Lodge project is the third to be built by L&G in England with others in Yorkshire and Bristol, using Yorkshire-built modular homes manufactured to the highest energy performance standards. The use of features such as solar panels and high quality insulation in the fabric of the homes means properties achieve an Energy Performance Certificate rating of ‘A’. Homes also use less water and have lower carbon emissions during construction and when lived in.

An additional 2.89 ha of forested area has been retained compared to the first proposal, wildlife corridors, wildflower areas, hedgehog roads, a pond and boxes for swifts, hedgehogs and bats are also included .

The new homes are flexibly designed to meet the needs of a range of residents. Some properties will offer contemporary, open-plan dining areas and kitchens, while others will offer a more traditional layout.

With shared ownership at Westwood Acres, people can buy a share of a property between 10% and up to 75% of its total value.

A five percent deposit is required along with a mortgage to cover the remainder of the share and rent on the remaining share.

A household earning £80,000 or less is eligible to use the scheme.

In 2020, the group Thanet Trees protested, disguised as zombies, against the clearing of trees at the site and the possibility that it was an old medieval plague burial pit, but a heritage study carried out as part of the application indicates that this could not be confirmed.

To make an appointment with the Westwood Acres sales team, visit www.lovelivinghomes.co.uk/westwood-acres or call 01474 528285.

Westwood Lodge was built in 1864 as a holiday resort for Spencer Herepath, a Kensington stockbroker whose business specialized in South American railroad securities.

The architect is not known at present, but there is speculation that he may have been Henry Winnock Hayward (1825-1893) who built houses of a similar style in Phillimore Place, Kensington, near the London residence of Herepath.

Herepath’s daughter Marion married Linley Sambourne, the famous Punch illustrator, in 1874. After Spencer Herepath died in 1884, Mrs Herepath lived there until the property was sold in 1893.

The next owner was Harry Rickards (1841-1911), a famous music hall entertainer who became a music hall impresario in England and Australia. It was his English domain. In 1911 he was considered probably the greatest music hall manager and owner in the world. The next owners were the Farrell family. The property has been in continuous family ownership from 1948 to the present day. From 1929, the estate was used for agriculture and market gardening.

The entrance pillars, gates and wall of Westwood Lodge were built around 1865 in a Gothic style.

The 17th century flint cottage is possibly listed as number 599 on Sheet 2 of the Tithe Allocation of 1838 for St Peter’s and Broadstairs, a house and garden owned and occupied by Mary Packer, connected to three fields arable. After 1865 it became the same owner as Westwood Lodge.

Development of 153 modular homes at Westwood Lodge is approved

How to increase the supply of affordable housing in Thanet?