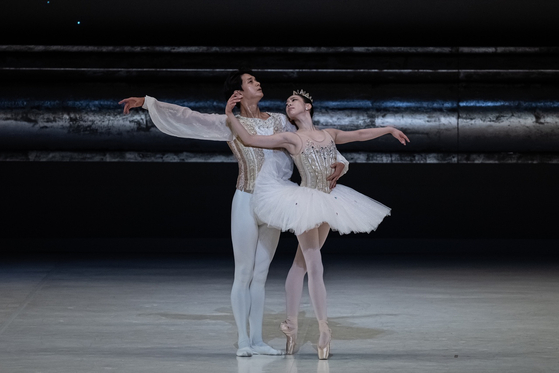 
The National Ballet of Korea will perform “Jewels” by George Balanchine from February 25 to 27 at the National Theater of Korea in central Seoul. [KNB]

The Korean Symphony Orchestra will perform the music under the direction of James Tuggle.

February 25 to 27: Indie band Se So Neon are holding their first solo concert in two years. “It’s not a joke,” the band said of the gig. Se So Neon will perform all of their latest songs released since 2020 on stage for the very first time.

February 25 – March 13: The original French production team of the musical “Notre Dame de Paris” will return to Seoul to show their appreciation for the Koreans who showed “so much love”, according to the production team. His previous run in Seoul had to end about a month earlier in January 2021 due to Covid-19.

The musical is based on the 1831 French novel by Victor Hugo. Set in the 15th century, “Notre Dame” follows several characters including Quasimodo, the misshapen bell ringer at Notre Dame Cathedral who is in love with a beautiful dancer named Esmeralda.

Actors Angelo Del Vicchio and Maximilien Philippe will alternate the role of Quasimodo while Elhaida Dani and Jame Bono will take on the role of Esmeralda.

There are no shows on Mondays.

Until February 27: The Korean production of a hit musical “Rebecca” is back in Seoul.
The musical is based on a gothic romance novel by Daphne du Maurier, but is also said to be inspired by Alfred Hitchcock’s 1940 film “Rebecca.”

The musical, which combines romance and suspense, premiered in Vienna in 2006.
Set in a mansion called Manderley, “Rebecca” tells the story of Maxim de Winter, a wealthy widower who lost his wife Rebecca in a drowning accident and cannot recover from the traumatic incident. Maxim marries another woman but his new wife learns a disturbing secret that Mrs. Danvers, the mansion housekeeper, still worships the late Rebecca.

When the musical first premiered in Seoul, it was the top-selling musical for five consecutive weeks. It still attracts music aficionados, who have already viewed it several times.

Musical director Robert Johanson has been leading the production since its premiere.
Four actors including Min Young-ki, Kim Jun-hyun, Enok and Lee Jang-woo will alternate as Mr. de Winter, while actresses Shin Young-sook and Oak Joo-hyun will play Ms. Danvers.

The show starts at 7 p.m. on Tuesdays and Thursdays, at 2 p.m. and 7 p.m. on Wednesdays, Fridays, Saturdays and public holidays and at 3 p.m. on Sundays.

Polish pianist Krystian Zimerman, described as one of the greatest pianists of his generation, is visiting Korea for the first time in three years for a four-city tour. [KASSKARA, DGG]

March 1, 2 and 6: Although he had to undergo a seven-day quarantine, Polish pianist Krystian Zimerman will travel to Korea to hold a series of concerts in four cities – Daegu, Busan Daejeon and Seoul. The touring concert for Zimerman, who is described as one of the greatest pianists of his generation, is part of Mast Media’s “The Great Pianists Series” project.

Zimerman will travel to Korea for the first time in three years for upcoming concerts. His previous concert in 2019 was a sold-out event as it was his first visit in 16 years.

March 11 – 13: Singer-songwriter Younha will hold a three-day encore concert titled “End Theory: Final Edition” starting March 11 for those who missed her previous concert last December. As the December concert was her first solo concert in two years, fans flocked to get tickets.


Younha said she would hold an encore concert for three days to make sure more people could see her perform.

She will perform her endless list of hits, including “Umbrella”, “123”, as well as her latest releases like “On A Rainy Day”.

Until March 18: The musical’s “The Lion King” international tour crew, which first visited Korea in 2018, is back for a seven-week tour.

Based on Disney’s 1994 animated film of the same name, the musical has been seen by more than 95 million people in more than 100 cities in 20 countries since its premiere in 1997.

The musical is directed by Julie Taymor with music by legendary lyricist Tim Rice, Elton John, Lebo M, Hans Zimmer and many more.

March 19 – 20:Singer and songwriter Lee Seung-yoon, who shot to fame after winning the hit JTBC audition show “Sing Again” (2020-21), which aimed to rediscover forgotten or obscure singers, will hold a solo concert in March. Lee released a full album on November 24 titled “Even If It Becomes a Ruin.”

Until April 20:Set in the Renaissance era, the musical “Something Rotten!” depicts the struggles of two brothers – Nick and Nigel Bottom – who strive to write their own masterpiece to surpass their rival William Shakespeare.

Premiering on Broadway in 2014, the musical was acclaimed by critics and audiences upon its release.

Until May 8:The popular musical “Jekyll and Hyde”, which tells the story of an epic battle between good and evil, has been popular in Korea since its first performance in 2004.

*Most tickets are available at ticket.interpark.com/global or by calling 1544-1555.