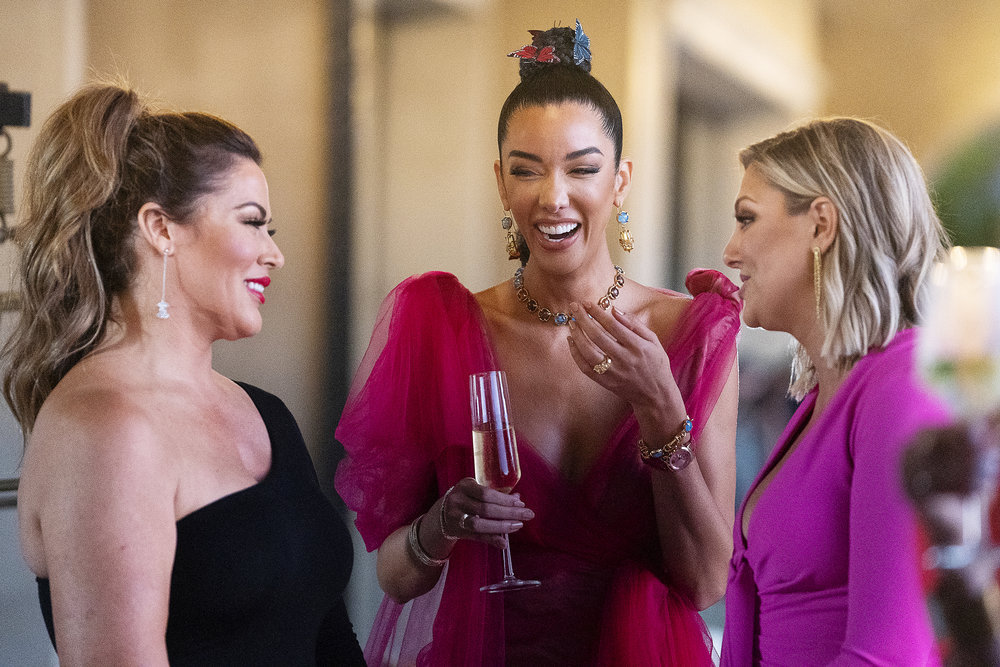 Noella Bergener sets sail on â€œThe Real Housewives of Orange Countyâ€ this week as the captain of the Titanic, blissfully oblivious to what lies just below the glamorous surface of his seemingly unsinkable life.

She has a new boyfriend in Shannon Storms Beador, who can certainly use a new friend, having already made half the cast angry with her this season.

And sure enough, Noella tells Shannon at the beautician’s office at the start of the episode that her husband Sweet James has found himself in a little tax mess, but they talk about it looking for a solution.

“It’s a big stressor,” NoÃ«lla tells Shannon as Shannon has needles injected into her face.

A quick reminder: Shannon told Gina and Emily Simpson some juicy gossip about Heather’s friend Nicole, Gina told Heather, then Emily confronted Nicole and dinner was as big a failure as the new “West Side.” Story “.

Heather surprises her husband Terry Dubrow with a visit to her plastic surgeon’s office. Which is nice, sure, but only until we realize that she’s mainly there to do a dramatic read of her text exchanges with Shannon.

Heather summarizes her vision of Shannon’s MO in a confessional.

â€œShannon doesn’t like getting her hands dirty,â€ Heather tells us. â€œShe’s never wrong. It is never his fault. She’s never the problem.

“I don’t agree,” she concludes, and if there was a jury listening to her, they would probably all vote for a conviction.

Gina meets our housewife of the week at a cryotherapy spa where they quickly strip down to fluffy earmuffs, fur gloves and socks to spend three minutes at minus 202 degrees in what looks like a refrigerator with window.

“I’m afraid my (body parts) will freeze and fall,” Noella tells Gina before stepping into the freezer.

“They certainly will,” reassures her Gina.

“The hardest part is my best friend,” NoÃ«lla said, weeping tears that would be sleet if she was any closer to the refrigerator. “Like, he’s my best (beep) friend.”

After the frost, she is brightened up exactly as the spa attendant told her she would, and the conversation continues with Noella telling Gina that the night before she had been so upset that she fell asleep in their sexual dungeon.

“Dungeon?” Gina responds, looking uncertain that the word meant what she thought it meant.

Long pause. “Do you haveâ€¦ a dungeon?” Â»Gina asks again.

“It’s a nice little room,” Noella chirps. â€œOne king bed. Satin sheets. Mirrors on the ceiling. But I was crying so much that I just wanted to leave.

“Oh my god,” Gina whispers, puzzled to say more for perhaps the first time in the series.

After this exchange, we see Emily and her husband Shane having a brief dinner with their children in their backyard and talking about their eldest daughter’s interest in being baptized in Shane’s Mormon faith.

Dr. Jen Armstrong also has a bit more screen time this week. Her daughter Cece is with Jen’s mother in Jackson Hole, Wyoming.

The week before, Jen had expressed a desire for greater emotional closeness with Ryne, her often shirtless husband. This week, Jen admits that she has always dreamed of more closeness to her mother of English descent.

â€œI basically married my mom if you put it all together,â€ Jen says in a moment of confession. Later, Ryne arrives home with Grandma and Cece, having apparently driven shirtless to LAX to pick them up.

Next, Noella calls Shannon in tears to tell her that she just received divorce papers filed in Puerto Rico that were written in Spanish, so her nanny had to translate them for her.

“I just want my husband back,” she sobs. “I want him to come tell me what’s going on.”

Soon after, Shannon and Gina meet at a restaurant to discuss their differences over what happened at Heather’s party.

“I made a mistake and I am (a jerk) for doing it,” Shannon says as they agree that they will try to be friends again.

â€œI’ll keep an eye out,â€ Gina told the camera later on how much she trusted Shannon. â€œI would like to have three so I can keep two open. “

They invite Noella to join them in cheering her up and offering her Brussels sprouts while she orders a dirty martini.

“It’s a strange time in my life,” NoÃ«lla says, as the camera zooms in on her dirty martini. “Divorce!”

Note: This is the second week in a row that Brussels sprouts have been served and discussed in front of the camera, raising serious questions about whether Big Sprout is behind this product placement.