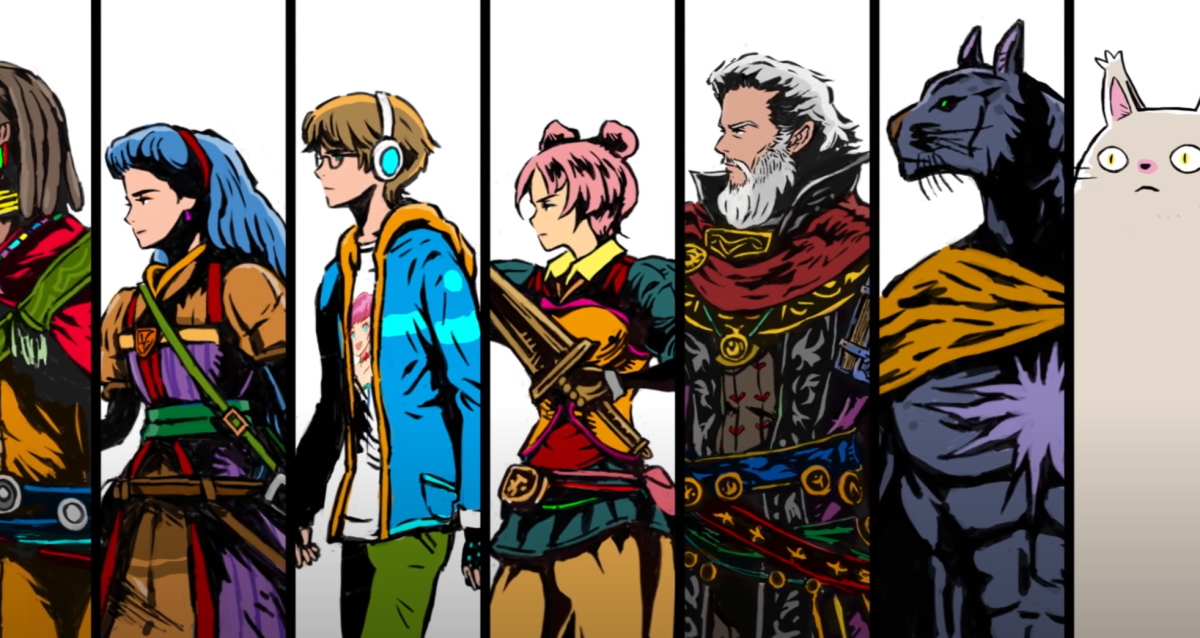 Dungeon Encounters finds depth in stripping the JRPG to its essentials

I really should have mounted this expedition a little earlier, but here I am with Rwenzo, rescuing my incapacitated heroes scattered across a dozen floors of this dungeon and bringing them back to town on the first floor.

The urgency is real because I realized that I was risking a permanent game over with every battle. If my party is wiped out by the ever-increasing threats I face, I can only continue the game if I have sentient characters on the first floor to start a new party with. So I equipped Rwenzo with my best gear, left my other three party slots open to fill with rescued characters, and heroically set off with her on a quest of my own making, a desperate mission that emerged naturally from a game that initially seemed absurdly abstract and simplistic.

Dungeon Encounters has no scenario other than the high-level scenario: a strange maze full of monsters has appeared near a town. It has no main characters, but a list of 24 names, each with a photo and a slice of biography buried in a submenu. It has no naturalistic world to explore: the maze is just a series of floors drawn like grids on a simple background (sometimes it looks like a crossword puzzle). There are no roaming monsters to watch and avoid, just grid locations marked with black hex codes and static images of them during turn-based battles. It has no visible shops, shrines, or stairways, just white hex codes marking their locations and menus to navigate. And your goal? Quite simply to explore each of the game’s 99 floors.

So yes, Dungeon Encounters is stripped. And yet… a soundtrack of whistling wind and drops evokes an atmosphere of neglect in the first nine floors of the dungeon, while the chirping of birds and the lush grassy background of the next 10 floors reflect your growing confidence and your awareness of the pleasure of walking each square on each floor (I have to walk all of them).

And also, of course, the pleasure of discovering what is hidden behind its simple rules. My quest to save my characters is the result of only three rules:

And so a new facet of the game appeared.

ASCII dungeon divers like Rogue, Angband, and Brogue have long proven that rich choices and consequences can emerge from the most abstract and mechanical setups. In particular, Dungeon Encounters resembles Angband in its looping gameplay as you go deep and then come back to the surface to resupply and re-equip, though it’s much less detailed. In that sense, Dungeon Encounters is much more like the formative RPGs of the 1980s, particularly Wizardry, which focused on labyrinth exploration and directly inspired the entire JRPG genre.

These battles are the beating heart of Dungeon Encounters, and like the rest of the game, they’re massively abstract and simplified. There is no Flashy Final Fantasy elemental magic or summoning. Spells have no charges or need mana, so when you select them they feel no different than a sword swing, and each attack just sets damage or a random amount at an upper limit.

There is also no weapon degradation, no potions or buffs. Incredibly, there are no character stats, other than level, health, and skill points, which you earn by exploring floors and determining what gear you can equip.

Yet this minimalist re-engineering of the classic JRPG combat system has you scrutinizing the subtle strategies that emerge. In early battles, you explore how ATB gauges require you to make decisions about which enemy to target: hit and kill this enemy before its gauge fills up, preventing an additional attack or eliminating this the enemy first because it is the most dangerous?

Then you find yourself exploring the interplay between the ATB system and Dungeon Explorers’ defense design, which gives every character and monster two forms of defense, one against physical damage and one against magic.

Granted by armor, these defenses are digital soaks that prevent damage against HP until fully depleted, and they fully recharge between battles. From these two rules emerge nuanced situations. Even a single point left in a defense will completely block permanent damage, allowing one to escape the Skin of Death’s Teeth and survive against all odds. And the way they recharge means your party can keep exploring much longer than in many dungeon crawlers, as you’ll usually return to full efficiency after each battle. At least until you step on a battle number much higher than the rest on the ground and realize there are enemies out there waiting to crush you. The difference between a 44 and a 94 is life or death.

As you get new weapons and armor, your party naturally begins to take shape. The game takes care to limit access to powerful spells like Petrify, which turns a monster to stone in five seconds of play, or a sword that attacks all monsters, or a powerful bow, which can hit flying monsters, so when you give one to a character, they are suddenly made special.

Tactics change and reform as you encounter new monsters. You learn that flying monsters are immune to melee physical attacks; that sharks have no magic defense; that certain armors grant bonuses to speed which fill the ATB gauges of the characters more quickly but at the expense of their defense. Battles are fast-paced and reward efficiency, and since you enter each battle on a consistent basis, you rarely feel like a tough battle is putting you on a spiraling path to loss. Executing commands can feel like a dance as you watch enemy and ally gauges and plan your assault.

There are plenty of other little features: you can equip party-wide abilities that resurrect and heal your characters; allow you to move up and down floors if there is a grid location at your coordinates, and a UI change skill that enlarges the view of the grid so you can see farther. There are journals, lists of most recently discovered shops, and special destinations like the Altar of the Gorgon, which can heal petrified characters if you enter their coordinates. And there are also some fun and weird stuff – math and map puzzles that point to coordinates to search for treasure.

But every feature is designed down to the bare essentials, squeezing out as much utility as possible. Returning to their roots in Wizardry and Ultima, Dungeon Encounters discards much of the cruelty that has been built around Japanese RPGs and finds a new purpose. A dungeon, a party, weapons, armor and monsters, and the promise that you can always go further, as long as you remember to hit sharks with magic and hit bone dragons with bare fists , bypassing 42,080 physical defense points to hit his only HP. Sometimes the little numbers are just as fun as the big ones.