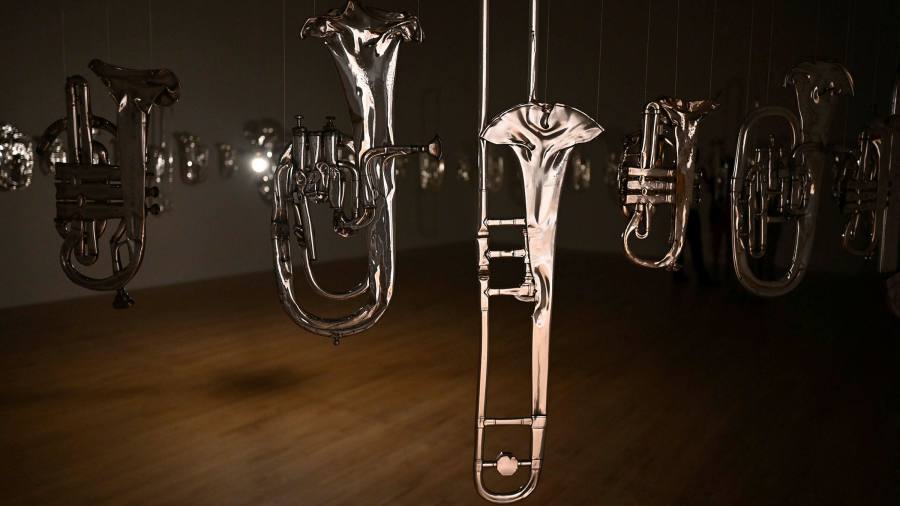 For the first time this century, Tate Britain surpasses Tate Modern to become the home of the most dazzling contemporary art on display in London. The Cornelia Parker Retrospective is the must-see exhibition of the season, and to get in you walk the length of Hew Locke’s magnificent parade of one hundred colorful plaster and fabric carnival figures, the processionits joys, its pathos and its postcolonial narrative exuberantly disturb the neoclassical gallery Duveen.

Then the ruckus stops, the color fades, the tonality is shimmering monochrome and Parker’s “Thirty Pieces of Silver” quiver in silence. It is a superb moment of opening: suspended on copper wire, more than a thousand everyday silver objects – teapots, candlesticks, plates, cutlery – flattened by a steamroller, arranged in 30 groups in the shape of disk, hover just above the ground in a strange grid formation. Dating from 1988, Parker’s first major work is famous but still astonishing: the brutal/delicate allure, the miracle of routine and domestic transformed into flickering strangeness – the forged beauty of destruction.

“Thirty Pieces of Silver” is the most original and memorable British sculpture of the 1980s. The lightness of being contrasts with the gang of heavy boys of that decade – Kapoor, Gormley, Cragg, Woodrow. Parker’s crushed mass of old silver seems weightless, a thing of wonder and grace: a sculpture not only lifted from the plinth but seemingly defying gravity, floating in the air.

“I feel like I like killing things and then resurrecting them,” Parker says. The Christian allusion is clear in ‘Thirty Pieces’, which sets the parameters for his later career: transience is the theme and the physical transformation of materials – ‘I think it is transubstantiation’ – the process at the heart of everything she does, on the scale of the minute or the monument.

The “The Negative of Words” gossamer is made up of tiny silver flourishes, remnants of a goldsmith’s engraving of letters. The ethereal “The Negatives of Sound” is drawn in black lacquer, a residue of cut record grooves. “Inhaled Cliffs” are chalk-starched sheets of the white cliffs of Dover.

For the “Bullet Drawing” series, Parker melted lead from a bullet, stretched it, and sewed it through paper; the results are reminiscent of Agnes Martin’s aerial and irregular linear abstractions. Parker works in a minimalist aesthetic – this show is almost entirely black, white and silver – but with bite. She draws Rorschach blots of ink with rattlesnake venom. In “Precipitated Gun”, the acid turns a murder weapon into a harmless, staggering horizontal pile of rust. Violence is disarmed in sober formal parades, elegantly orchestrated.

Parker’s famous installation “Cold Dark Matter: An Exploded View” is a garden shed and its contents exploded, on his instructions, by the British military. Twisted scraps of metal hang by transparent threads in a cube shape: a jumble of gardening tools, a parasol, a bicycle wheel, an ice skate, a discarded record player, books, hair curlers, a hot water bottle is caught in the middle of the explosion. Shards of charred wood hang outside; inside, a single bulb creates a play of shadows, changing as you move.

The connotations also change. Parker made the work in 1991, “in response to the IRA bombs going off in London, that constant threat of explosion”; today it resonates with the carnage of war in Europe, the bombardment of civilians. It’s a timeless piece, philosophical even (the title refers to the Big Bang theory), but, like all of Parker’s works, it also reflects on Britishness, with elements of bric-a-brac comedy, of suburban elegy – the fragility of the lives that once possessed these ephemera.

Parker’s Fragments truly function as relics – each item’s history lends mystical significance. “They act as substitutes, materials and matter,” she says. In 2015, a quarter of a century after “Cold Dark Matter,” and in a darkening, war-torn world, she created “War Room” in “response to the hangar explosion. . . I felt that I wanted to do something that acknowledged the war.” This installation is the only sustained and brilliant note of color at the Tate: an immersive blood-red tent constructed from perforated crepe paper negatives left over from the production of commemorative poppies.

Thousands of poppy-shaped holes commemorate countless lives lost in war. The vast tent, which Parker considers “a kind of chapel”, is both fragile and sheltering, sumptuous and soaked in the taint of conflict. Parker has never made a solid sculpture, and images of refuge, threatened or broken, frame his work, from the detonated shed to the most recent work here, “Island”, a greenhouse covered in white chalk. “England with a cliff veil,” Parker calls it, implying a closed, uncertain nation looking inward as crises strike – crumbling coasts, rising seas, ecological disaster and politics.

Parker is a conceptual artist, and she can be playful in a consciously Duchampian way – for “The Distance (A Kiss with String Attached)” she wraps Rodin’s “The Kiss” in a mile of string, inflecting romantic rapture with a prosaic entanglement. But although she uses all the tropes of the formal agenda of modernism – found object, grid structure, abstraction – her works are more accessible, less abstruse and more moving than those of most conceptualists. They feel intuitive, emotionally charged, surely partly because they go back deep into the felt experience.

Born in Cheshire in 1956, Parker was raised Catholic. His farmer father was a tyrant and unpredictably violent. His introverted German mother had been a nurse in World War II and, when Parker was a teenager, was hospitalized with mental illness – following an unspoken trauma of horrors she witnessed. “I’m still trying to make sense of it – I’m fighting this chaotic wave of emotion,” Parker says, adding, “I can’t stand Catholicism now.” Nonetheless, his paradigm of destruction and resurrection is as fundamental to his work as the sense of instability, the shifting ground of a child adrift.

Recent pieces have been more political, including the ambitious ‘Magna Carta (An Embroidery)’ (2015). Parker designed this epic embroidery of the Medieval Charter Wikipedia page, with words stitched together by various hands, including Doreen Lawrence (“justice”, “denial”, “delay”), mother of murdered teenager Stephen Lawrence; Pulp singer Jarvis Cocker (“Common People”); and whistleblower Edward Snowden (“freedom”) as “a portrait of the times”. As a documentary, it’s impressive. But his truly spectacular works remain those, spectral, mystical.

For “Perpetual Canon” (2004), Parker had 60 trumpets, tubas, cornets, a giant looping sousaphone crushed – by a forklift – then suspended to form a phantom, silent brass orchestra, amplified by the huge reflections projected on the gallery walls and ceiling. There are memories of the thousands of breaths that once animated these deflated instruments, and a sense of a new presence – like a collective “huge inhale”, hopes Parker, a restrained gasp continuing “forever”. And so the group continues on its way: as uplifting and lyrical an image of loss, renewal and survival as any in 21st century art.

“It’s not a prisoner of the moment”