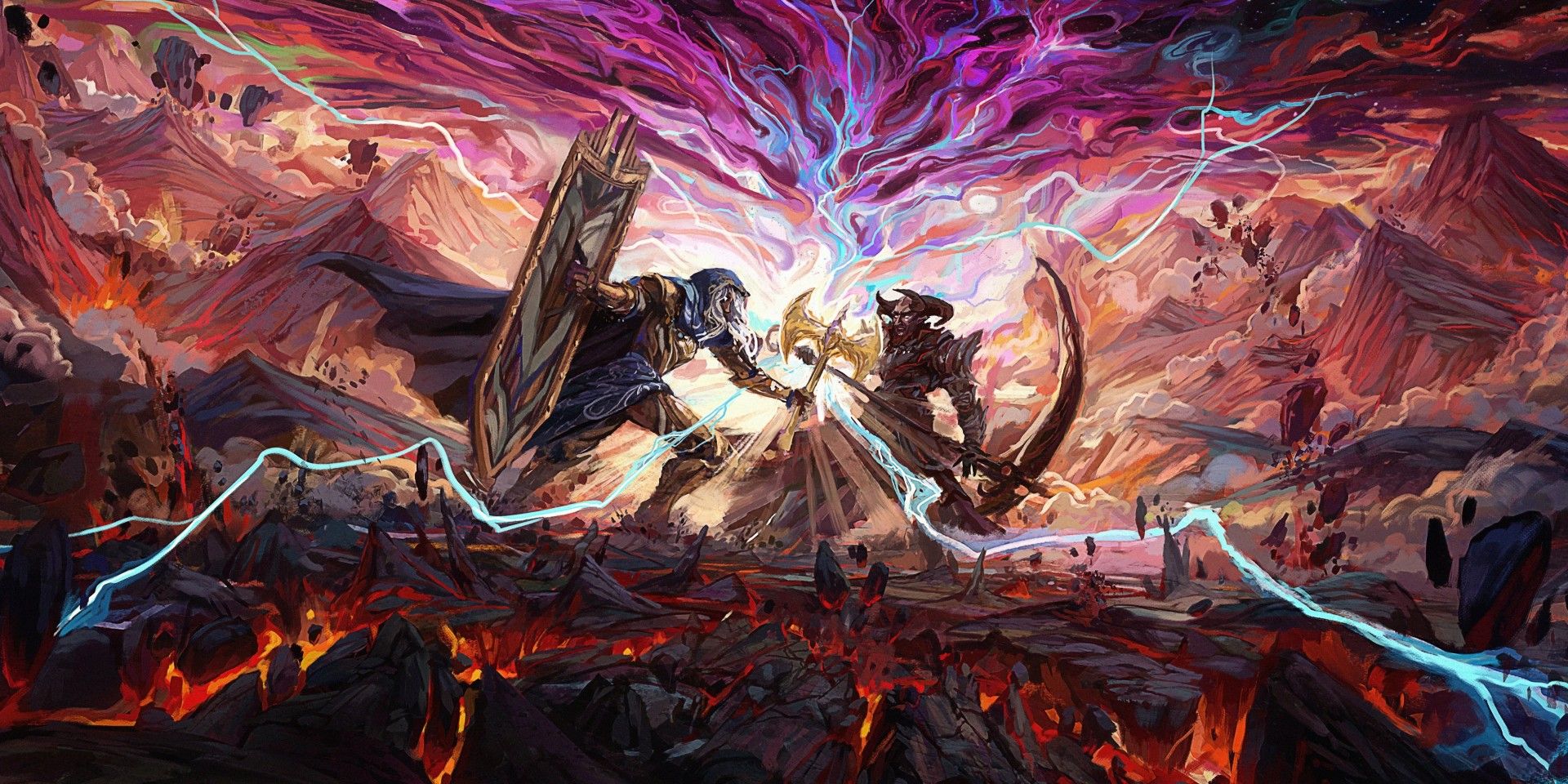 Calamity shows how to make evil gods interesting in DnD

Designing gods for one Dungeons & Dragons campaigning can be a difficult task. Dungeon masters must not only design an entire pantheon and religion, but also give the gods compelling personalities. This can be even more difficult when creating evil gods. Most DMs take the easy route by having their malevolent deities driven by a lust for power or the pleasure of seeing mortals suffer. That can work well enough, but these gods aren’t always the closest or friendliest. Brennan Lee Mulligan solved this problem by critical rolethe four-part miniseries of Exandria Unlimited: Calamity.

The world of Exandria, created by Matthew Mercer, is plagued by a group of deities known as the Traitor Gods. These gods chose not to defend the mortal races they created when the Primordial beings attempted to wipe them out. As punishment for their betrayal, these gods were banished to outer planar prisons. The vast majority of mortals regard traitor gods as evil, for they rule over the realms of pain, disease, deceit, and madness. However, Mulligan turned this story around and presented a new perspective through which to view these evil gods.

Why did these gods betray?

During the second episode of Calamity, a paladin named Zerxus encountered one of the traitor gods. This deity was Asmodeus, Lord of the Nine Hells. Zerxus had the chance to speak with Asmodeus and understand him as a person. During this conversation, Asmodeus explained why the traitor gods chose to do what they did.

According to Asmodeus, the deities did not decide to abandon their creations to the Primordials out of apathy or cruelty; they did it because of a promise they made to the Primes. This promise was somehow broken by the Primes, resulting in war with the Primes. Asmodeus expressed great anger at being seen as a traitor when he was the one who stayed true to their promise.

It is difficult to say how true this account is. After all, Asmodeus is the father of lies and has a reputation for corrupting mortal souls with his sweet talk. Yet if even a fraction of what he said was true, it changes everything the people of Exandria know about the gods. The Principal Deities could have broken a promise for selfish reasons, while the Traitor Gods kept their promise.

RELATED: What We Want To See From Exandria Unlimited: Calamity Characters

Are their domains really bad?

Another groundbreaking revelation from Asmodeus is that traitorous gods took part in creation. Primordial deities created the mortal races and bestowed upon them virtues such as honor, loyalty, and love. Asmodeus explained that when it was the traitor gods’ turn to expand on creation, there wasn’t much left to add, so they decided to make these virtues matter by creating their opposites.

Asmodeus himself offered mortals lies, deceptions, and betrayals. He didn’t do it out of hatred or cruelty. Asmodeus felt that mortals would appreciate the virtues the primordial deities had given them if they also understood their absence. The betrayals they suffered would make them value loyalty, and the existence of hate would make love more important. Asmodeus claimed that mortals misunderstood his gifts and wrongly labeled him evil because of it.

It is not yet known if the other traitor gods also created vices and sufferings for the same reason as Asmodeus. If they did, it will completely change the current understanding of the role treacherous gods play in Exandria. The suffering they caused was not caused by hatred; it was an innocent attempt to expand creation and make life a more meaningful experience.

How DMs can use it in their own campaigns

What makes these revelations so interesting isn’t that they absolve the traitor gods of any wrongdoing or make them evil. When Zerxus spoke with Asmodeus, he even said that the gods still betrayed the mortal races they had created by abandoning them to the Primordials. Instead, these revelations complicate traitor gods as characters. They’re not just mean for being mean, and they have motivations and personalities that make them relatable. Dungeon masters trying to design their own pantheon could learn from this.

“Evil” gods in a campaign might wish to help mortals and make life easier for them, but do not choose because of a promise or oath they have sworn. The suffering they allow (or directly cause) could be the result of some higher ideal they believe in. Their loyalty to that ideal or promise might be greater than their love for mortals. A concept like this could create an interesting internal conflict within the gods for players to explore.

Another option is to make “evil” gods and mortals simply misunderstand each other. Gods don’t see the world the way mortals do, so it’s easy for different perspectives to clash. The “evil” gods who unleash disease, death, suffering and hatred upon the world might truly believe they are doing mortals a service. They could see these difficulties as obstacles that mortals had to overcome to become stronger. Adding depth and complexity to evil gods doesn’t remove their villainy – it just makes them more interesting antagonists.

Sasha Borissenko: A look at prisoners’ rights – and earnings