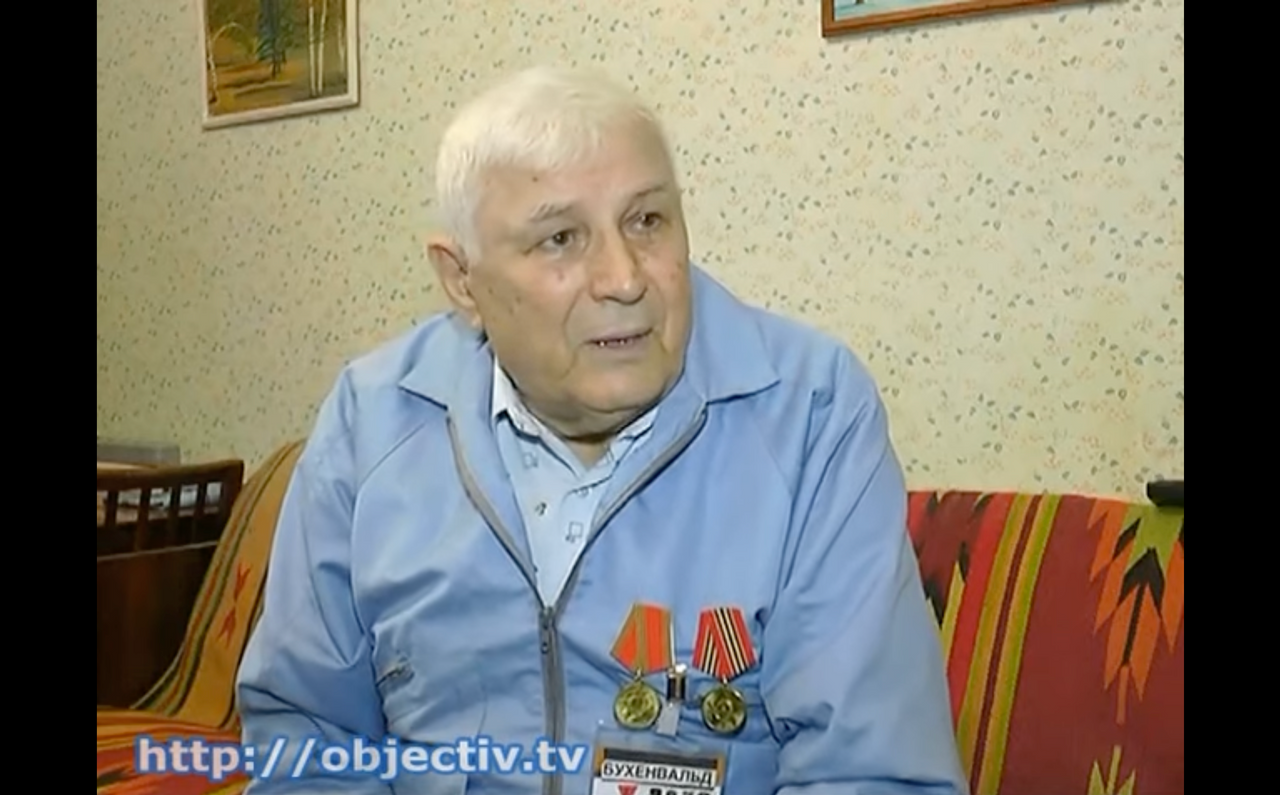 A Russian bombardment of Kharkiv (Kharkov) killed Boris Romanchenko, a 96-year-old survivor of four Nazi concentration camps. According to her granddaughter, her apartment and her body were completely burned down due to the attack. He was buried in Kharkiv on March 24.

Romanchenko is now among some 1,081 civilians who have been killed since Russia invaded Ukraine just over a month ago.

With the approximately 42,000 survivors of Nazism still alive in Ukraine, Romanchenko lived through the most traumatic experiences of the 20th century. Now they are once again caught in the middle of another horrible war. The majority of them are too weak and sick to seek refuge in bomb shelters. Romanchenko himself had not left his apartment for many months even before the outbreak of the war, fearing infection with COVID-19.

Romanchenko was born into a peasant family in eastern Ukraine, in the Chernigov region, which was then already part of the Soviet Union. His family narrowly survived the horrific famine of 1932-1933, brought about by Stalin’s criminal policy of forced collectivization.

On June 21, 1941, the Nazis invaded the Soviet Union, quickly overrunning large parts of what is now Belarus, the Baltic states, and Ukraine. Over the next four years, the Nazi war would lead to the deaths of approximately 27 million Soviet citizens. Among them were at least 5 million Ukrainians, including almost 1.5 million Ukrainian Jews.

In 1942, at the age of 16, Romanchenko was deported as a forced laborer by the Nazis to Dortmund in Germany to work in a coal mine. He would later recall: “They [the Nazis] compiled lists of all boys and men between the ages of 16 and 60 and gradually sent everyone to Germany so that they would not join the partisan movement.

These mass deportations were intended both to break the growing resistance of the population and to remedy the dramatic shortage of labor in the German war economy. In Germany, they were forced to perform forced labor for the Nazi war economy, either directly for German companies or in concentration camps, often affiliated with either the military or a specific German company. At its peak in 1944, this gigantic slave labor machinery encompassed, by contemporary estimates, 8.5 million workers from across occupied Europe (about a quarter of the total workforce).

Between 3 million and 5.5 million people, including many young minors like Romanchenko, were brought to Germany from the occupied territories of the Soviet Union and Eastern Europe – the vast majority of them of the Reichskommissariat Ukraine. They were pejoratively called “Ostarbeiter” (“workers from the East”).

A few days after Romanchenko arrived in Dortmund, an accident at the mine that killed a worker caused enough chaos that Romanchenko and a few others took the initiative and tried to flee. However, they were captured and, as punishment, sent to concentration camps.

Romanchenko was first sent to Buchenwald in January 1943. He later described his experiences at Buchenwald: “The crematoria were working with an increased load. [of bodies] because the food was so poor. They just gave enough for people to get around somehow. At that time, I weighed only 34.5 kilograms.

Attempts to flee or resist were severely punished. “The most horrible incident was when they hanged 80 people, they had found explosives on them and [after killing them] the SS guards turned their bodies face up and we had to walk past and watch them.

From Buchenwald he was transferred to Peenemünde concentration camp, which was affiliated with the German Army Arms Office (Heereswaffenamt). Here, concentration camp inmates like Romanchenko were forced to work on the Nazi program to produce V-2 missiles.

After a few months, he was again transferred to Camp Dora-Mittelbau (also known as Nordhausen), which was part of a huge concentration camp complex in central Germany that was also primarily used for the Nazis’ V-2 missile program. . At Dora-Mittelbau, most of the prisoners had to perform heavy labor underground, deprived not only of adequate food but also of daylight, making it one of the concentration camps with the highest mortality. (It is estimated that between 12,000 and 20,000 inmates died there during the war.)

Just before the end of the war, in March 1945, Romanchenko was again transferred to the Bergen-Belsen concentration camp. When liberated by British and American troops, Romanchenko, now 19, weighed just 39 kilograms (about 86 pounds).

After the war, he first worked for the Soviet military administration, then joined the Red Army, which had played the main role in the liberation of Europe from Nazism. He was stationed in East Germany until 1950.

Romanchenko returned to Soviet Ukraine at age 24, became an engineer and worked for a company involved in the production of agricultural technology. Over the past decades, Romanchenko has played an active role in keeping the public memory of the horrors of Nazism alive. He was the Ukrainian representative at the Buchenwald-Dora memorial site and spoke frequently on television about his experiences, wearing both his concentration camp inmate uniform and Red Army medals. He did everything he could to prevent the horrors of war and fascism from happening again.

His assassination in a bombardment has now caused justified outrage and horror among millions, who feel that all the unresolved issues of the 20th century – war, fascism and dictatorship – are resurfacing with force. It is a stark testimony to the criminal nature of the war waged by the Putin regime in Ukraine.

As the Kremlin, exploiting well-founded fears of another world war and fascism in the Russian population, seeks to portray its invasion as a continuation of the Red Army’s fight against Nazi Germany in World War II. , it is, in reality, a war waged by a capitalist oligarchy which emerged from the destruction of the very achievements of the October Revolution that the Soviet masses were defending against fascism.

Besieged by imperialism, Putin’s regime launched the invasion in a desperate and reckless way to defend its national interests and somehow reach an agreement with imperialism. In Russia itself, Putin’s regime is increasingly turning to political repression and the promotion of far-right nationalism and militarism, as masses of working people are pushed into misery by economic sanctions.

Not only are the objectives of the war reactionary. By its very nature and the methods with which it is waged, war serves to disorient, divide and confuse working people not only in Russia and Ukraine but throughout the world.

The gruesome death of Romanchenko is a good example.

Ever since news of his assassination broke, the imperialist powers and the Zelensky government have sought to exploit the legitimate anger over Romanchenko’s death for the most sinister ends. Ukrainian President Volodymyr Zelensky has used it to plead, once again, for even greater NATO intervention in the conflict, an act that directly threatens a Third World War.

He called the murder an example of “Russian fascism” which was supposedly worse “than Hitler” – who was responsible for the industrial murder of 6 million European Jews and tens of millions of European workers. Zelensky made these statements as his own government relies on neo-Nazi forces like the Azov Battalion, which openly glorify the Nazi movement and Ukrainian Nazi collaborators, to fight the Russian military with NATO weapons. At the same time, far-right paramilitary and vigilante units are rampaging across Ukraine, terrorizing the population.

But nowhere has the cynical attempt to exploit Romanchenko’s death for imperialist war purposes taken on such a sinister note as in Germany, where parliament held a minute’s silence for Romanchenko. It is a parliament that includes representatives of the neo-fascist Alternative for Germany (AfD), whose leader, Alexander Gauland, publicly ridiculed the crimes of Nazism as “bird shit”, and it’s a parliament that just passed a record €100 – billion war budget, tripling Germany’s defense spending, something even Hitler didn’t dare attempt after his came to power in 1933.

The long-planned resurgence of German militarism has been accompanied by a systematic whitewashing of the crimes of Nazism, notably by Jörg Baberowski of Humboldt University, who argued in 2014 that “Hitler was not vicious”. Since then, it has received state support. Unless stopped by the working class, the consequences of the volcanic resurgence of German imperialism will surpass even the horrors of Nazism during World War II.

Workers must reject with contempt these attempts to exploit Romanchenko’s death to advance imperialist war preparations against Russia. As criminal and reactionary as Putin’s war in Ukraine was, comparisons with Hitler and Nazi Germany are false. They ultimately downplay the scale of the crimes of fascism and can only desensitize and disorient working people just as fascist forces are building and arming all over the world – with Ukraine now at the center of this process.

Above all, workers must understand Romanchenko’s death as a sober reminder that the 20th century remained, indeed, unfinished. Contrary to the assertions of the bourgeois experts of the 1990s, the dissolution of the Soviet Union and the destruction of the remaining achievements of the 1917 socialist revolution in Russia did not mark “the end of history”. On the contrary. Thirty years later, capitalism is once again plunging humanity into disaster. “Socialism or barbarism”, as the great Marxist Rosa Luxemburg put it, is raised more strongly than ever before.

The only way to commemorate Romanchenko appropriately is to fight to build a socialist movement in the international working class that is determined to end imperialist war, fascism and the COVID-19 pandemic.

After three decades of wars led by the United States, the outbreak of a third world war, which would be fought with nuclear weapons, is an imminent and concrete danger.