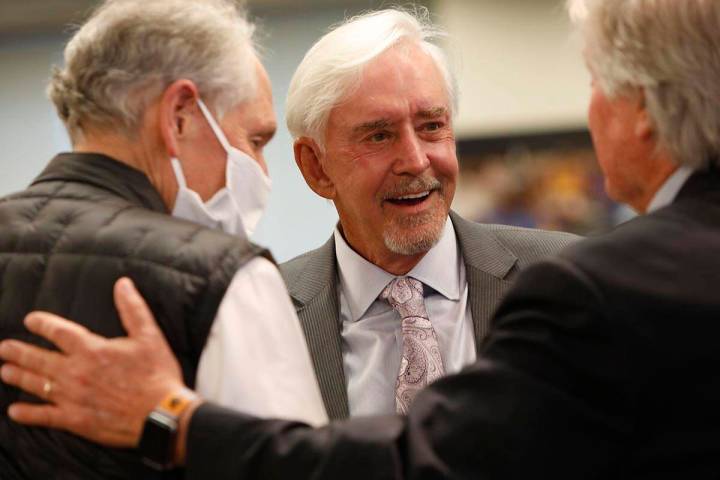 A Las Vegas nonprofit that helps formerly incarcerated people reintegrate into society will soon have a new home.

Hope for Prisoners announced on Friday that the Billy Walters Center for Second Chances, 333 N. Rancho Drive, will open in April after receiving a “substantial gift” from Bill and Susan Walters.

The announcement was made at the nonprofit’s monthly reinstatement graduation ceremony at the Metropolitan Police Department headquarters. Twenty-eight graduates received certificates and commendations after completing the 18-month program.

Bill Walters, once considered one of the nation’s most successful sports bettors, said at the ceremony that his time in prison motivated him to give back to those who have been incarcerated.

Walters was released from federal prison amid the coronavirus pandemic in 2020 after serving 2½ years of his five-year sentence, which was handed down in July 2017 and included a $10 million fine.

Prosecutors said Walters made more than $40 million by illegally trading the shares of Dallas-based Dean Foods after giving Davis a prepaid disposable phone so they could discuss inside information without being traced.

Programming a “model” for the United States

Walters said he mentored two dozen men in federal prison in Florida. While all said they did not want to return to prison, many likely would due to lack of support and opportunity, Walters said.

“This really should be – and in a perfect world would be – the model for the rest of the United States of America,” Walters said after the ceremony. “It’s an amazing program.”

Hope for Prisoners helps people reintegrate through long-term support and services. It graduates more than 450 people per year. The nonprofit works with Metro, the College of Southern Nevada, The Vegas Chamber, Workforce Connections, the state Department of Employment, Training and Rehabilitation and hundreds of volunteers, according to a Press release.

Hope for Prisoners president and CEO Jon Ponder said 74% of those who completed the program got full-time jobs after graduation.

“All of these things are going to be there that don’t exist in prison,” Walters said. “But more importantly, as John and these people have talked about, there will be a support mechanism for their families, and you have to have that.”

Graduates prepare for the future

Graduates wearing caps and blue gowns were applauded as they entered the ceremony. They were seated in the middle of a room surrounded by family, friends, police and local leaders.

Two people shared their “living vision,” an essay that asks each graduate to describe what they will do on the day one year after Friday’s ceremony. One copy of the essay will be given to the graduate and another copy will go to a mentor who will work with them to make the vision a reality.

Cedric Hasan, 31, who lives at the Casa Grande transitional housing centre, said Ponder’s promise of a brighter future during orientation inspired him to keep going.

“My long-term goals are to establish a career, reconnect with my family — basically, just be the best version of myself and continue to build myself,” Hasan said. “I’m not perfect, but I will always work on myself and remain a law-abiding citizen.

“It meant a lot to me because it shows that I have more support than I thought. I basically know that I am not alone.