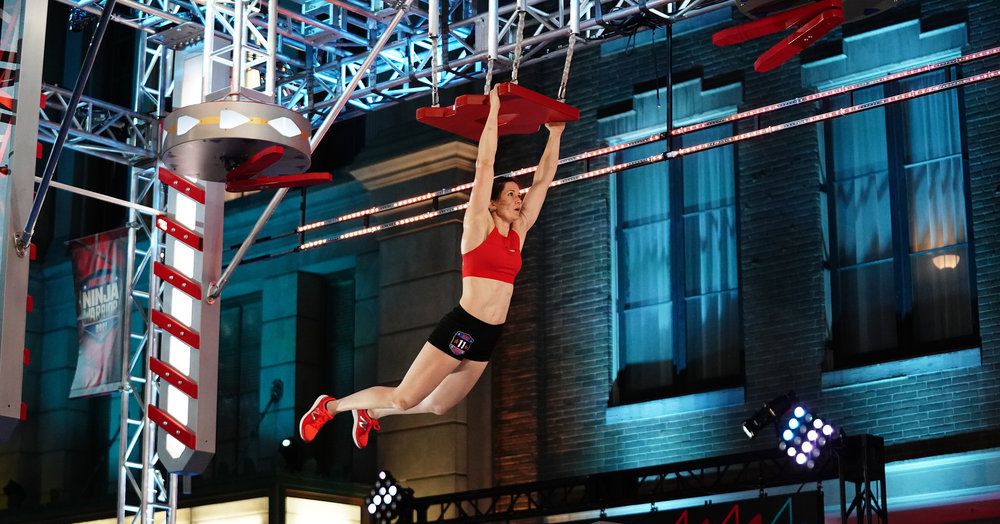 Welcome to the fourth and final night of the American Ninja Warrior Season 13 Semi-Finals! That night was Vegas or bust. There was no other chance to qualify for the national final.

The night saw the return of big veterans like Flip Rodriguez, Jake Murray, Austin Gray and Jesse Labreck. The only father / son duo to reach the semi-finals, Brian and Kai Beckstrand returned together, but would they leave together?

How did it all end? With Jesse adding to his already stellar record, and with a Power Tower that was raw speed and the last Safety Pass coming home with a veteran. Read on!

Devan Alexandre: Devan, 16, had his mother, Pow, on the sidelines to eagerly encourage him. From the start, Devan set a steady pace with powerful movements, heading towards the back half of the course. There, he faces the return of Crazy Clocks. Aside from a short fight on the final time, Devan managed it. However, once he started in The Dungeon, it was obvious that his tank was nearly empty. He made a noble effort to plan a way through the obstacle, but his race stopped there. Although we were pretty sure it would get him to Vegas.
Results: Exit on the dungeon

Sem Garay: We couldn’t help but laugh at the revelation of Sem’s “manager” (it was Akbar), but his run was triggered on Diamond Dash.

Lindsay Eskildsen: After a good start at the Tacoma Dome, the mom of two ended her season on Barrel Roll.

Dan Polizzi: Dan’s girlfriend and fellow Ninja, Heather was on the sidelines, while Ninja Brandon Mears watched on the virtual sidelines. Dan had a good run, but for the second time he stumbled upon The Dungeon. It was a tough night, we had to see if his time at the obstacle would move him forward in Vegas
Results: Exit on the dungeon

Nate Hansen: Nate never ceases to amaze viewers. Nate has a growth hormone deficiency that stunted his growth as a child. He uses his Ninja Warrior platform to inspire others, like 11-year-old Aiden, who also has the same deficit. Nate easily made his way to the back half of the course and still looked fresh and strong on the salmon ladder. After a confident journey through Crazy Clocks, Nate quickly started The Dungeon. In a run that was just amazing, he locked himself in the Spider Trap and calmly finished it for the first buzzer of the night.
Results: Complete

Jamie Ross: With her boyfriend, Flip Rodriguez, cheering her on, Jamie was on Barrel Roll.

John Mack: The 6’5 “student came out on Crazy Clocks.

Dan Wentworth: Ouch! After a hard-to-watch success on Diamond Dash, Dan stepped out on Drop Zone.

Eric Middleton: Eric, an entomologist, always brings delicious snacks for the hospitality team. The bet this time was that Matt and Akbar would enjoy a snack full of insects for each obstacle after the warped wall. Hopefully Matt and Akbar were hungry. After the warped wall, they ate jollof rice with grasshoppers. The salmon ladder brought Korean waxworm pupae. After the Crazy Clocks, they dug in bee bread. Eric chose the diving boards at Split Decision and was the first to pass safely! This brought the cricket cookies. As Eric hit the bell, Matt and Akbar reluctantly ate the tarantula sushi.
Results: Complete

Sam Folsom: Sam is an 18 year old high school student who owns one of the most famous Ninja Warrior obstacle barns in the sports community. He took a hit on Drop Zone but rocked it and finished his run on the Crazy Clocks.
Results: On Crazy Clocks

Jamie Rahn: Jamie is Sam’s Ninja Mentor and was encouraged by figure skater Johnny Weir (Johnny even coordinated his outfit with Jamie’s). Entering his 11th season, Jamie selected Diving Boards and, shockingly, went there. It was probably good enough to move him to Vegas, however.
Results: On the diving boards

Tyler Yamauchi: Known as the “muscle ball”, Tyler is a former gymnast and is 5’1 “tall, making him the shortest male competitor of the night. He finished the class in front of his adorable children.
Results: Complete

Heather Weissinger: Heather is a cardiac electrician who places pacemakers for a living, in addition to being a firefighter. She made a one-handed stop on Barrel Roll. Did it strain his grip strength? She had enough energy left to make another one-handed stop on the Drop Zone, but on the last pipe, Heather peeled off as she searched for the exit.
Results: Exit to Drop Zone

Brian Beckstrand: Brian hit the buzzer in qualifying alongside his 15-year-old son Kai. This time dad stumbled upon Drop Zone.

Kai Beckstrand: Next was Kai, who finished fastest in qualifying. After telling us that he would love to be a firefighter like his father, we joined Kai on Drop Zone. He did not repeat his father’s race and came out unharmed. As Kai finished the Salmon Ladder, it was obvious he was setting a pace that would take him to Vegas. After the Crazy Clocks, Kai moved to The Dungeon and got down to business. Kai was starting to look tired on the obstacle and missed a few of his holds. To avoid disaster, he completed the obstacle as fast as he could. On the Spider Trap, Kai had a few slips and made us hold our breath. He worked for the last few meters, but found another buzzer.
Results: Complete

Mike Silenzi: Known as “The Stallion,” Mike had a great run with a sideline filled with famous Ninjas cheering him on. For the first time in eight years, Mike has hit the semifinals buzzer.
Results: Complete

Hunter Guérard: Hunter got a call on The Dungeon but got it done.
Results: Complete

Kyle Soderman: Kyle is a stunt performer at Universal Studios, so he was home. He pulled off a superb stunt with a safe jump across the diving boards, finishing the course with the fastest time at this point.
Results: Complete

Cal Plohoros: Cal is a 15 year old ANW Junior alumnus. He is close to Flip Rodriguez and he finished the qualifying course. Cal gasped us all as he took off from Barrel Roll and fired at the Diamond Dash. But the rules say Ninja is not allowed to run from one to the other. Cal had to stop and plant his feet for a second. He hit the breaks and his body leaned forward, but he launched again and managed to pass safely. In the blink of an eye, Cal had sprinted towards the Crazy Clocks. We thought he had this until his hold suddenly gave way.
Results: On Crazy Clocks

Ava Colasanti: Ava fell in the Drop Zone, but still had a shot at making it into the women’s rankings.

Ben Martin: Ben made an incredible stop on Diamond Dash which saw him crawl to safety. His run ended for good on Crazy Clocks.

Cam Baumgartner: Cam set a new fastest time at that point in the night after crossing the course and setting the dungeon on fire.
Results: Complete

Austin Gray: Since Austin donated his kidney to his friend Kaylee, he has been campaigning for kidney donation and working with the National Kidney Foundation. Courtney, a woman Austin became friends with as he guided her through her kidney donation to her father, watched her run. On the course, we joined Austin on Drop Zone. He moved, facing obstacle after obstacle. At Split Decision, he asked the crew to confirm if their time was stuck in Vegas. When they said yes, Austin went for the risky diving boards. The time he saved meant he was in position for the Power Tower.
Results: Complete

Turn Rodriguez over: Flip faced a challenge with this split decision, as he had already fallen on both the diving boards and the dungeon. But his entire season was in jeopardy when he stumbled upon Crazy Clocks.
Results: On Crazy Clocks

Joe Brown: Joe is a hell of a jumper and even wiped out Zuri! Joe spent a lot of energy on Drop Zone but was still on top of the Warped Wall. Joe fought well but was out on Crazy Clocks.
Results: On Crazy Clocks

Kyle Schulze: Kyle had wanted to pass the fifth hurdle for so long. It was a great moment when he cleaned up the warped wall. Crazy Clocks has also completed its year.
Results: On Crazy Clocks

Matt Bradley: The 19-year-old Penn State student picked The Dungeon on the way to the buzzer.
Results: Complete

Ethan Swanson: The four-time veteran hurried on the course but did not escape the Crazy Clocks, preventing him from participating in the national finals.

Jake Murray: Jake thinks his competitive skateboarding experience has translated well into his Ninja Warrior career. Who are we to successfully argue? After a little tangle on Drop Zone, Jake was on the back half. Finishing the Crazy Clocks led him to the national final. His footwork was on display when he narrowly escaped the diving boards. Jake finished the course with the fastest final of the night in the semi-finals! It would be him and Austin on the Power Tower
Results: Complete

Donovan Metoyer: Donovan’s flashy white suit looked immaculate even when he fell on the diving boards. He always went to Vegas.

Jesse Labreck: Finally, it was time to answer our burning question. Could Jesse beat her third 10-obstacle course? With absolute concentration, she set to work. Jesse apologized to his stressed friends after bumping into Diamond Dash. After that, it was the Jesse manual. She overcame all obstacles, including The Dungeon. With the final climb behind her, Jesse extended her entry into the history books with another buzzer.
Results: Complete

It was just quick versus quick. These two competitors from Colorado are relentless. It was anyone’s definition of the game. With the last Safety Pass of the season in play.

True to form, this race was a heartbeat from the start and never gave up. Both were even until the end. There was no call to make until suddenly Jake made a decision to make the falling shelves that caused him to collapse on the carpet below. Austin hit the buzzer and claimed the prize.

Are the Prisoners of Ghostland on Netflix? Where to look