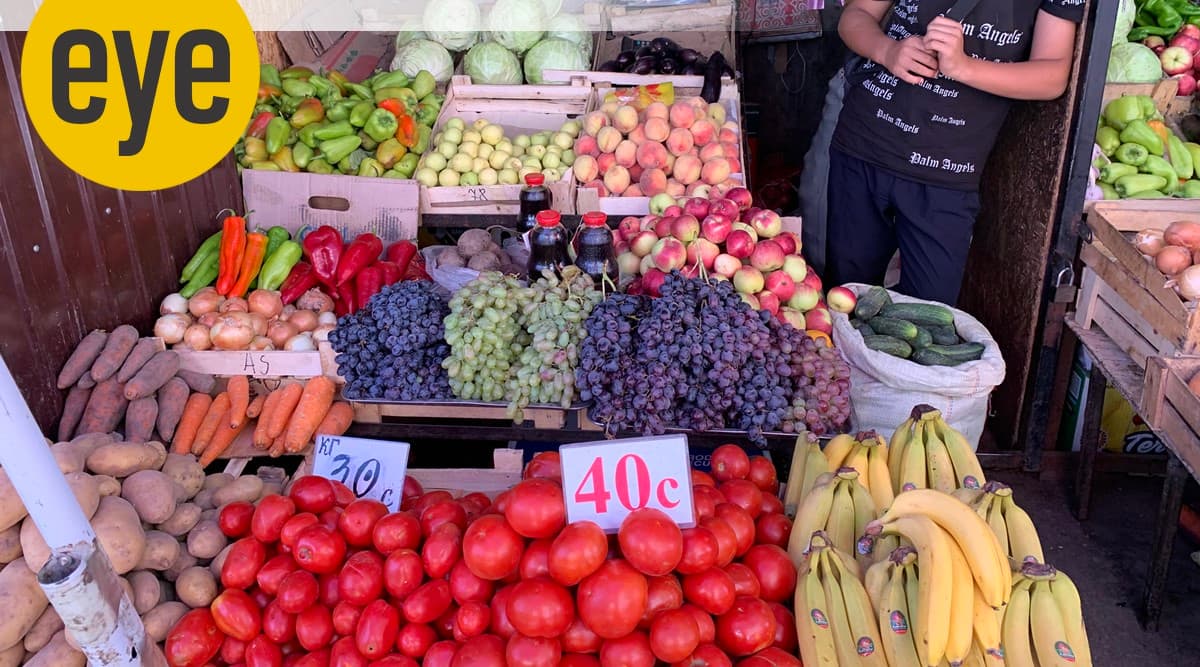 The lantern swings wildly in the mule-drawn cart as it follows the light into the watchtower and approaches the inn next to the bazaar… And what a bazaar it is! A colonnade of the most lavishly decorated shops, wrapped in velvet and satin, each pillar coated in copper and gilding, gigantic tiers fueled with butter, burning like the sun and fairies on the parapet etching their glow against the night sky… . There is everything you thought belonged only to the bahisht, gold, silver, jewellery, precious stones, silk, brocade, carpets, porcelain, spices, even the best horses. It is said that gold is permanently melted into the mint here and the king sleeps on a golden bed of ivory and jasper. The merchants are decked out in the finest finery, as are the Turkmens, their beards waxed and curled. The plebeans retire to tents. The innkeeper fills the samovar, lines up fresh fruit from his orchard, boils the lentil soup and simmers the meat in its own juices. Meanwhile, rugs, coats and pillows warm the weary traveler. And he sleeps with stories, about how the tower was actually the home of a warlord’s daughter. How her father locked her there to protect her from a prophecy that she would die of a spider bite at 16 and how he cried so hard the day she died after being bitten by a spider hidden in her fruit basket. They say her heartbreaking grief shattered the tower and it shattered into pieces. Tomorrow is another day on the road.

Today, centuries later, we stand in the same place, the still-ruined tower, in Burana, which rests on the remains of the ancient city of Balasagun, one of the largest medieval cities in Kyrgyzstan‘s Chui Valley. Along with Kashgar in present-day China, Balasagun was one of the capitals of the Turkish Khanate and a key city on the ancient Silk Road. This segment of the Chui Valley, located between the Kyrgyz capital of Bishkek and Lake Issyk-Kul, became one of the main political, economic and military centers of Eurasia. Archaeological excavations have revealed cities and monumental constructions, dating from the 5th to the 12th century, reflecting the cultural and artistic traditions of many countries and peoples, from Byzantium in the West to India in the South and China in the East. . Balasagun was believed to be quite advanced for its time, with its own sewage and irrigation system and quarters for all religions.

The museum here has shards of memory – in porcelain jars, earthenware vats for storing grain and water, bronze tools and weapons, oil lamps and hair clips – each documenting civilizational extremities . Until everything turns to dust, leaving only the tombstones. All over the steppe meadows and among the remains of millstones, where travelers ground their wheat to make their own bread, are stone figures of the dead. Whether it was a warrior who had won many battles with his mighty sword, the man who held a chalice of peace, the Mongols, Tartars, Persians and Chinese, monks and women Buddhists, each has left an imprint in the sands of time. But their food continues to keep us alive.

Our local host welcomes us in his yurt and serves us the kompot (compote), as we did in the time of nomadic nomads, cold in summer, hot in winter. She had cooked berries, apricots, peaches, apples, rhubarb and plums in a large pot of water with raisins and cinnamon. Did an Indian traveler exchange the cinnamon here eons ago? After all, the Chinese traveler Hiuen Tsang traveled these paths on his way to India.

If the desire for silk led to trade routes and a confluence of cultures in one of the earliest examples of globalization, it was hunger that drove travelers to acquire cooking skills. As their caravans stopped, travelers shared the food they brought from home and the skill of making it. This is how the Silk Road became the world’s premier fusion cuisine experience. And since people were always on the move, prepared foods had to have a long shelf life.

At the Pishhpek restaurant in Bishkek, a transcreated fort-inn, we find the origin of our samoussa, triangular pockets of lamb meat puff pastry cooked in its own fat with onions. Called samsa, it is interchangeable with cheese, cabbage and pumpkin stuffing, a flexibility that allowed Indian traders to take it home. It was portable, packed with protein, and energizing on long rides.

Oriental delights: Travelers used to take naan with them on their long and arduous journey. (Credits: Rinku Ghosh)

But at the halts, we celebrate. The meat came from upland grazing animals, sheep or horses, and was boiled in its own broth for hours over charcoal in cast iron cauldrons with cabbage and onions. It is said that dead sheep, which had been pounded by the hooves of horses during a game of buzkashi, were the best dish, giving us the first “meal in a pot” in the world.

And although Marco Polo has been credited with bringing noodles from China, hand-pulled strips of dough were used liberally along the Silk Road. So you have a multicultural noodle soup or lagman, with farm vegetables and potatoes that were brought over by Spanish and Portuguese traders and have now become indigenous to those areas. Manty or steamed dumplings carry the aromatic whiffs of spices from Osh Bazaar, the Silk Road market that continues to thrive in Bishkek.

Samsa, which is similar to Indian samosa. (Credits: Rinku Ghosh)

Could boorsok, shallow fried dough pillows, be the precursor to our crispier namkeens? Served as an anytime snack that can last for days, they are piled on the dastorkan (tablecloth), to be enjoyed with honey, dates, jam, raisins or butter. Could the cheese balls come from kurut, the accidental cheese? As the nomads carried the milk in their camel leather saddlebags, the galloping motion of the horse churned it and separated the milk into curds. Drained, dried and lightly salted, it turned into a strong and portable food! Today, it’s a roadside savory, with fermented mare’s milk or kumis, a guaranteed probiotic for wilderness wanderers. The importance of kumis in Kyrgyz culture is demonstrated by the fact that Bishkek got its name from a paddle used to churn fermenting milk.

Flatbreads or naans are plentiful, a legacy of long-haul travelers, who clearly wore them for satiety and carbs. But the Silk Road had its own balance of “hot” and “cold” foods to avoid stomach upset during strenuous journeys. Yogurt and garlic, pomegranates and walnuts, apricots and lamb, peaches and trout. Spice bazaars are still there, as are gold mines (Kyrgyz gold is of high quality). But it is the shared food that has become a cultural icon, a testament to a borderless world that has been, and still can be, lived.