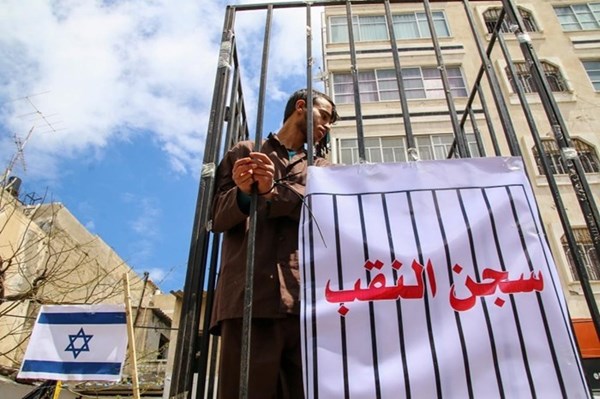 The official spokesman for the Commission of detainees and ex-detainees, Hassan Abd Rabbo, said Wafa news agency on Tuesday that the health of prisoner Kanaan Kanaan, who has been on a hunger strike for 17 days, has deteriorated and is now vomiting blood as his weight drops dramatically as the occupation refuses to transfer him to the hospital and held him in the ‘Ofer’ detention centre.

Prisoner Kanaan, from the town of Hizma in occupied Al-Quds, is a released prisoner who was arrested again by the occupation forces last August and transferred to administrative detention for a period of four months.

Abed Rabbo also mentioned that the detainees of the “Nafha” detention center on Tuesday returned two of their meals in solidarity with the striking prisoners.

The spokesperson added that 30 prisoners began to show signs of fatigue, exhaustion, weight loss, joint pain and severe emaciation due to a lack of fluids and vitamins in the body, pointing out that prisoner Jihad Shariteh’s health condition has deteriorated as he was transferred to the Ofer prison clinic after he started vomiting blood.

On Sunday, 20 inmates joined the 30 striking inmates who are continuing their hunger strike for the 17th day, rejecting the policy of administrative detention, in addition to continuing to boycott the occupation courts to varying degrees.

As for the 20 prisoners joining the strike, Abed Rabbo said that among them, there are 10 prisoners at ‘Naqab’ prison, and 10 others at ‘Ofer’, including five administrative detainees.

This initiative comes as the enemy expands the scope of its arbitrary procedures, the number of administrative prisoners, including children, women, the elderly and the sick, exceeding 760, taking into account that 80% of prisoners administrative staff are former inmates of IOF prisons.

The number of administrative detainees is 780, including at least six minors and two female detainees, and the largest number of them are in Al-Naqab and “Ofer” prisons.

The Palestinian Prisoners Club said that the administrative detainees will continue their strike and that there is currently no indication or outcome of any ongoing dialogues with the administration of the Israeli occupation prisons.

The Prisoners Club also pointed out that the striking prisoners are awaiting the response of the occupation prison administration to their demands, confirming that new prisoners will join the strike if the demands are not met.

What are the WoW Classic WotLK Heroic Dungeon Requirements?