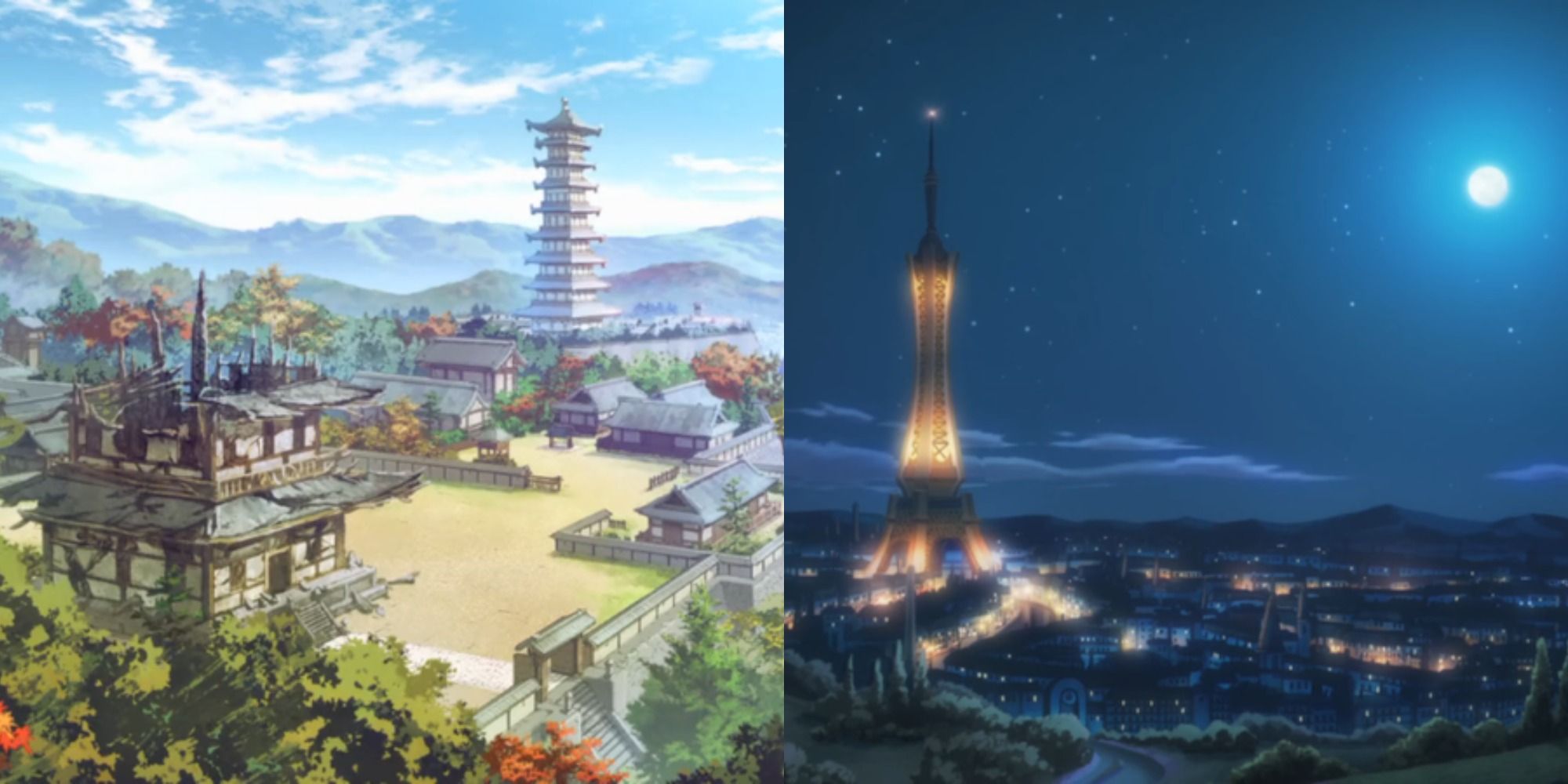 The world of Pokemon is made up of fifteen regions, eight of which serve as the setting for the main series of games. These fantastic realms are full of vast and incredible wonders, natural and man-made, which make the Pokémon world even more exciting and engaging.

RELATED: 10 Places In The Wizarding World We’d Like To Visit

Every fan of the franchise has their favorite places in the Pokémon world. They can be towns, cities, natural sites or one of the many modern regional constructions. These places are as intriguing as they are appealing, and while some have more futuristic elements, others engage the tradition and myth that have become synonymous with Pokemon.

Located in the center of the Galar region, Hammerlocke is one of the most impressive structures in the Pokémon world. The entire town is based inside a medieval castle, where it is hidden behind high walls that date back to the Middle Ages. History comes to life in Hammerlocke, literally.

The castle itself is one of the most breathtaking constructions in Pokemon, so vast that it is capable of supporting an entire city within. In addition to that, the city is also home to a few places of interest, like the Hammerlocke Vaults and the Hmmerlocke Stadium. A trip to the Galar region is a must if only to visit this Gothic wonder.

Kalos, the French-inspired region, is home to some of the most elegant and impressive architectures in the Pokémon world. Castles and palaces adorn the countryside, filling Kalos with an unmistakable sense of royalty. However, Anistar City towers above almost every other city in the region, thanks to its jaw-dropping sundial.

The origin of the massive pink structure is unclear; some claim it came from outer space while others attribute it to a legendary Pokemon. Regardless of its origin, the sundial is still a magnificent landmark that would surely take the breath away of anyone who stood before it and basked in its glory.

Unova has many intriguing natural sites. Places like the White Forest, the Giant Sinkhole, and the Dragonspiral Tower contrast with the more futuristic towns in the area, providing a refreshing balance. Yet no natural landmark comes close to the wonder that is Chargestone Cave.

RELATED: The Best Starter Pokémon Of Each Generation

Located west of Unova, Chargestone Cave has the largest magnetic field in the Pokémon world. In fact, the magnetism inside is so strong that the stones glisten and float, and electric bolts shoot out of them. The cave is worth a visit to witness such a spectacular sight, although it is best to keep it short.

Hoenn has its fair share of creative towns and villages. The towns of Sootopolis and Mauville, as well as the towns of Lavaridge and Pacifidlog are among the most original places in the Pokémon world. However, Fortree City has an extra layer or quirk that makes it stand out.

Almost everyone wanted to live in a treehouse as a child, and the people of Fortree City have made that dream come true. While there can be dangers in living in treetop huts, the excitement can wear off after a while. However, the experience would be unique for visitors, who would enjoy every second of their stay.

Unova was a source of division when Generation V debuted. As the first region to take inspiration from a place other than Japan, it stood out from its predecessors. Unova is inspired by the United States and the New York metropolitan area in particular. This was especially clear in the wonderful city of Castelia.

With towering buildings that resemble man-made golems and a circular shape that adds extra dynamism to the city, Castelia is a thriving metropolis of endless possibilities. The city is the Big Apple of Pokémon, a melting pot of cultures from some of the best and coolest regions in the Pokémon world. Castelia is also an artistic cradle for artists from all over the world who come to Unova to open galleries and mount exhibitions.

5 City of the heart

Any city with the word “heart” in its name must be large enough for its region of origin. Indeed, Hearthome is the metropolis of Sinnoh and the home of the Super Contest Hall. It is also the fifth largest city in the Pokémon world and it lives up to its reputation.

Hearthome is full of places of interest, including the Poffin House and the Pokémon Fan Club. It is also a technologically advanced city, and most homes use elevators instead of stairs. Fans will get to revisit this sprawling city in upcoming Gen IV remakes, Brilliant diamond & shiny pearl.

Generation VII introduced the Hawaiian-inspired Alola, arguably the most naturalistic and outdoor area of ​​the main series games. Alola is home to many natural wonders, including the Mahalo Trail, Melemele Meadow, Lush Jungle, and Malie Garden.

However, nothing beats the Vast Poni Canyon. Inspired by the Grand Canyon in Arizona, the Vast Poni Canyon is Alola’s toughest yet most breathtaking trail. The magnificent Sun / Moon Altar sits in the center of the canyon, providing another reason to visit.

Johto, arguably the most cohesive region in the Pokémon world, wears his oriental inspirations on his sleeve. It takes inspiration from the real Kensai region and features the franchise’s most glaring Japanese settings.

RELATED: 10 Pokémon That Deserve Regional Forms (& What Type They Should Be)

Ecruteak City, Johto’s most iconic settlement, is home to the iconic Bell and Burned Towers. It is a city of myths and legends, closely associated with the legendary Pokémon of Johto, Lugia, and Ho-Oh. Ecruteak has a distinctive fall air, most noticeable in the Bellchime Trail, making it even more peaceful. The city embraces tradition and offers many places of interest, such as the Kimono Girls’ Tea Room and the Ecruteak Dance Theater.

Generation VIII was somewhat divided from the start. Still, most players agree that Galar’s locations are some of the best in the franchise. Wyndon City, the most populous colony in Galar and the Pokémon equivalent of London, is the perfect example.

Wyndon is home to some of the most iconic places in Galar. Wyndon Stadium, Rose Tower, Rose of Rondelands and Picadilly Street make Wyndon the undisputed capital of fun and excitement in Galar. The options are endless, but the city can get a little too noisy whenever the Gym Challenge takes place.

No city compares to Lumiose. Clearly based in Paris, Lumiose makes the most of its French inspiration, giving the Pokémon world its own version of the City of Lights. Busy streets lined with smoky cafes, chic avant-garde trendy stores and plenty of shops with all kinds of goodies make Lumiose the ultimate metropolis.

But, of course, the main attraction in the city is the Prism Tower. The tower is synonymous with the region itself, resting in the center of town and tall enough to honor the clouds. Tourists from all over the Pokémon world travel to Kalos for the sole purpose of witnessing the romantic and classic Lumiose. Once they set foot in the city, it is love at first sight.


Next
The 10 best Pokémon parents, ranked

David is a twenty-eight year old Mexican writer and reader. After studying marketing in school, he spent three years working in a nine-to-five office before deciding to pursue a career as a writer. He now works as a lead writer in ScreenRant and does a more freelance job, talking about the entertainment industry he loves so much. Currently, he is also writing his second novel while actively working on the publication of his first.